The PCS DWP executive is wrong to say no to strikes

This article is over 13 years, 6 months old
The PCS civil service workers’ union group executive in the Department for Work and Pensions (DWP) made a decision last week that is a setback to the campaign against the attacks on public sector pay.
By Dave Owens and Steve West
Downloading PDF. Please wait...
Tuesday 08 July 2008

The PCS civil service workers’ union group executive in the Department for Work and Pensions (DWP) made a decision last week that is a setback to the campaign against the attacks on public sector pay.

The executive, which is led by the Socialist Party, voted by 26 to five not to call strike action next week alongside Unison union members in local government, and other PCS members in other departments.

This is despite the national executive of the PCS encouraging all the departments in dispute over pay to coordinate their action with Unison.

The PCS, with general secretary Mark Serwotka playing an exemplary role, has previously been at the forefront of those pushing coordinated action, as we saw in the 24 April strikes with teachers and lecturers. The decision not to strike is a blow against our previous efforts.

All public sector workers are facing the same attacks on pay, so it makes sense that we should take action together where possible, increasing the power of our strikes.

If we had struck next week it would have made it much more likely that we could force the government to give us more money. Members were prepared to take two days strike action, and were expecting us to be out.

To vote against action was a disgrace. The decision was taken on the basis that DWP management have offered talks on a number of issues, including over flexible working and the draconian sickness policy.

The DWP has also found money to pay some workers 1 percent at the end of the month. The fact that management have announced this is testament to the industrial action 80,000 PCS members have already taken, and its worry that we will take more.

The offer is still an insult as it does not go anywhere near giving civil service workers a pay rise in line with inflation.

The group executive admits that management’s concessions cannot form a basis to a settle our pay dispute, but still says that no action can take place while talks are ongoing. This is wrong.

The DWP is the biggest group in the PCS, and the fact that we are not on strike lessens the impact of next week’s action and weakens the action of all others who will be fighting back.

The five people who voted for taking action were ourselves, Martin John, Dave Richards and Martin Cavanagh.

Despite this setback, all PCS activists should get down to the picket lines on Wednesday and Thursday of next week.

We also need to make sure we are campaigning for the biggest possible vote for action in the coming national ballot.

Dave Owens and Steve West are members of the PCS DWP group executive. They write in a personal capacity

Striking back at New Labour 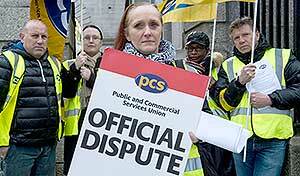 PCS must step up the action to beat the government 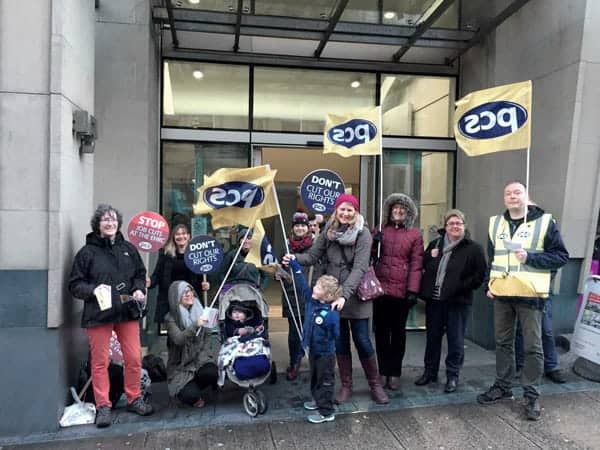