The strike is on: pensions revolt looms on 28 March

This article is over 15 years, 10 months old
Tuesday 28 March will see nearly 1.5 million workers strike over pensions in the biggest show of unity since the General Strike of 1926.
By Charlie Kimber
Downloading PDF. Please wait...
Saturday 18 March 2006

Tuesday 28 March will see nearly 1.5 million workers strike over pensions in the biggest show of unity since the General Strike of 1926.

That was the message from leaders of nine unions today when they announced the results of their strike ballots.

This battle can change the mood in Britain, revitalise every trade union and kick-start the pensions resistance everywhere.

Overall 81 percent of those balloted voted to strike, with turnouts around 30 percent – not bad for a postal ballot and certainly higher than many local government elections.

There will be a total stoppage of all balloted on 28 March, along with what Dave Prentis, Unison’s general secretary, called “further national action”.

The strike will not just hit local government services. Unison alone has balloted workers at 6,280 employers.

The strike will hit schools, further and higher education, police authorities, toll bridges, environment agencies and privatised companies whose workers were once covered by local government. So, for example, in Leeds the buses and the airport will stop.

It will have some of the characteristics of a general strike.

Tony Woodley, general secretary of the T&G union, said, “This strike is about low paid council workers, the majority of them women, defending themselves and claiming what is rightfully theirs.

“If it’s good enough for fat cats and MPs to protect and improve their pensions, then it is certainly good enough for the low paid workers we represent. We will not let our members down.”

“Over 200,000 GMB members are incensed at attempts to steal up to a third of their hard earned pensions to offset employer contributions.”

Alan Ritchie, general secretary of the Ucatt construction workers’ union, said, “Our members work in a pressurised and physical part of local government.

“The nature of their work impacts on their health. That is why it is right to retain the right to retire at 60 on a full pension.”

Several of the general secretaries blamed the Tories, who lead the local government employers’ body, for torpedoing a deal.

No doubt the Tories will seek to present themselves as the “friend of the council tax payer” and the enemy of “union power” – but they are not the reason for this strike.

Deputy prime minister John Prescott makes the final decision on this pension scheme. He has asked the unions and employers to reach a consensus, but in the end he makes the rules.

A strike on 28 March is, in the final analysis, a direct confrontation with the government.

We need big pickets and large lively mass demonstrations in every major city.

This will be a huge strike, but it is unlikely to shift the government on its own. There needs to be escalating action to two and then three days or more soon afterwards.

And the TUC must call a demonstration over pensions on the day of the strike – in line with the policy passed at its last congress.

March against the war on 18 March, strike on 28 March, keep fighting – and we can finish off Blair. 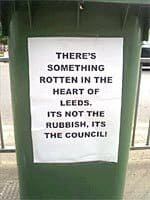 Action is biting as Leeds bin workers fight back