The Tories: ‘We needed the cash to deal with dangerous trees’

This article is over 12 years, 8 months old
The lavish lifestyles of the Tories are still emerging as the expenses scandal unfolds.
Downloading PDF. Please wait...
Tuesday 19 May 2009

The lavish lifestyles of the Tories are still emerging as the expenses scandal unfolds.

John Maples, the former shadow defence secretary, submitted claims for the maximum allowed for his second home in Oxfordshire while registering the Royal Automobile Club in London’s Pall Mall as his main home while he was moving house.

After leaving the club, he gained the approval of the Commons fees office to designate what he called a “self-contained flat in the house of friends” as his main residence for six months before he purchased a new property in the capital.

He consistently nominated his detached house in Banbury as his second home for additional costs allowances (ACA).

In a letter to the fees office in March 2006 Maples, a senior figure within the Tory party wrote: “There is an unclaimed balance on my ACA for the current year of £1,364.65 and I attach a form claiming this amount.”

He was paid despite failing to submit receipts for these “expenses”.

A month later, he wrote again with a list of his anticipated costs for the coming year, adding: “I hope it will therefore be in order for me to claim the maximum of £1,835 per month without submitting details on each occasion.”

But its not just gentlemen’s clubs that we have paid for. We are also footing the bill for dangerous trees.

Tory Anthony Steen claimed £87,000 on a country mansion that had 500 “dangerous trees”.

The MP for Totnes in Devon designated his constituency property as his second home and then claimed the maximum available amount under the ACA.

Over four years he claimed £87,729, including payments for tree surgery, guarding his shrubs against rabbits, maintaining a separate cottage and overhauling his private sewage system.

It has a swimming pool and tennis court. Steen rents a house in London.

The country gents also include James Clappison, the Tory work and pensions spokesman. He owns and rents out 22 houses and also owns a farm and a cricket club – yet has claimed £102,241 since 2001 for his second home.

But don’t let this give the impression that the man is well off.

Corruption goes right to the heart of the system 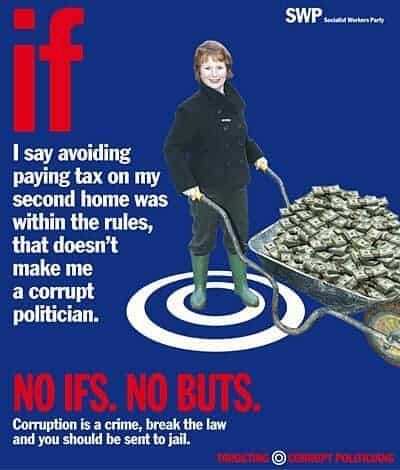