FIFTY FIVE years ago this Sunday the US state committed one of the greatest crimes in history. It detonated an atomic bomb half a kilometre above the Japanese city of Hiroshima at 8.15am on 6 August 1945.

Life below ceased. Tens of thousands of people were vaporised as a 300,000C fireball consumed the centre of the city, grimly announcing the nuclear age. Nothing remained of them except shadows, etched like film negatives on the few stone surfaces that were left intact. The bomb was small by the standards of today’s nuclear weapons. But the destruction unleashed on the civilian population of Hiroshima, and of Nagasaki by a similar bomb three days later, was staggering.

A single bomb destroyed 42 of Hiroshima’s hospitals. It killed 270 of the 298 doctors and 1,645 of the 1,780 nurses. Within seconds 60 percent of the city was wiped off the face of the earth. Those who survived the immediate blast were drenched in deadly radioactive fallout.

An Australian journalist, visiting the city a month after the blast, wrote: “Hiroshima does not look like a bombed city. It looks as if a monster steamroller has passed over it and squashed it out of existence. In the hospital I found people who, when the bomb fell, suffered absolutely no injuries but now are dying from the uncanny after effects.

For no apparent reason their health began to fail. They lost their appetite, their hair fell out. Bluish spots appeared on their bodies, and then the bleeding began from the ears, nose and mouth. The doctors gave their patients vitamin A injections. The results were horrible. The flesh started rotting away from the hole caused by the injection of the needle. And in every case the victim died.”

The death toll stood at 140,000 by the end of 1945. The second atomic bomb killed half the population of Nagasaki, 70,000 people. The number of people in Hiroshima suffering from the lingering radiation stood at 352,550 in 1990. The US government ordered this slaughter of the innocent not to end a war, but to start one-the four decades of Cold War rivalry with Russia for global domination.

The nuclear attacks were justified by the claim that they forced Tokyo to surrender without the need for a bloody invasion of the main Japanese islands. US PRESIDENT Harry Truman said in 1945, “We have used the bomb in order to shorten the agony of war, in order to save thousands and thousands of young Americans.”

Even more damning, they also knew by the summer of 1945 that Japan was beaten and was at most a couple of weeks away from surrender. Japan’s airforce and army had been effectively destroyed.

Oil refining capacity had slumped by 83 percent, aircraft engine production by 75 percent and airframes by 60 percent. Bombing had destroyed 600 major factories and driven 8.5 million people from the cities. The allies had sunk over 90 percent of Japanese shipping. They controlled the skies above Japan and the seas around it.

The most effective sea blockade in history was in place. Japan could not import oil, rice or other essentials. The US chief of staff, Admiral William Leahy, later revealed, “By the beginning of September [1944], Japan was almost completely defeated through a practically complete sea and air blockade.”

The US had long since cracked Japan’s military codes and President Truman was informed of all important Japanese cables. He knew throughout July 1945 that the Japanese government was desperately trying to get Russia, with which it was not yet at war, to convey surrender terms to the US and Britain.

His private journal is full of references to Japan seeking peace. On 12 July, for example, he wrote, “Telegram from the Jap emperor asking for peace.” Truman admitted, “The bomb might well put us in a position to dictate our terms at the end of the war.”

A successful test explosion took place on 16 July. A day later Truman sat down with Churchill and Stalin at the Potsdam conference to discuss the post-war carve-up of the world. Every state had fought the Second World War to gain territory and influence. Now the tensions between the wartime allies began cracking open.

Truman’s war secretary Henry Stimson wrote in his diary that at Potsdam: “Truman was evidently much fortified by something that had happened. He told the Russians just where they got on and off, and generally bossed the whole meeting.”

For the US’s rulers, it was not enough merely to have a working atomic bomb. They had to show Russia, which now occupied Eastern Europe, that they were prepared to use it. Stimson wrote, “Let our actions speak for words. The Russians will understand them better than anything else. We have got to regain the lead and perhaps do it in a pretty rough and realistic way.”

The US dropped the second bomb, on Nagasaki, just as Russia declared war on Japan and began sweeping with ease through Japanese lines in northern China. The US worried that a swathe of East Asia and Japan would come under Stalin’s sphere of influence. Defenders of the bombings point to the six million warning leaflets the US dropped over Japanese cities.

But the decision to drop those leaflets came the day after Hiroshima was destroyed. Their purpose was, in the words of US general Leslie Groves, “to exploit the psychological effect of the bombs on the Japanese” rather than to avoid civilian deaths.

Sickeningly, the warning leaflets fluttered down on Nagasaki THE DAY AFTER the atomic bomb had obliterated it. Neither Kokura nor Niigata, the two other target cities, were leafleted. The US military had no qualms about murdering Japanese civilians. It had demonised the Japanese people to such an extent that it considered civilians legitimate targets.

Some 325 planes dropped thousands of bombs on Tokyo on 9 March 1945. Within 30 minutes, hundreds of fires had joined into a 16 square mile inferno. The aircrews could smell burning flesh thousands of feet up. Over 100,000 people perished in the firestorm.

By the summer of 1945 only two Japanese cities with populations of more than a quarter of a million had not been firebombed-Kyoto and Hiroshima. The US remains the only state to have used nuclear weapons, and it has seriously considered firing them on at least nine occasions since. US secretary of state Dulles threatened the Chinese with nuclear weapons during the Korean War.

Nuclear states have also come close to launching missiles in dozens of false alarms. Nuclear weapons have not stopped war. There have been over 500 conflicts since 1945 and the incidence of major wars is increasing.

The end of the Cold War ten years ago has not ushered in a stable, nuclear-free world. There are now seven states with nuclear weapons, after Pakistan and India detonated warheads two years ago.

The US alone has 12,000 warheads, enough to destroy the world several times over. It is threatening to plunge the world into a new arms race by pushing ahead with a $60 billion “Star Wars” missile defence system. It is again trying to project its power across the globe while demonising whole peoples, such as the civilians it is starving and bombing in Iraq.

The US ruling class still defends the bombing of Hiroshima and Nagasaki. US president Bill Clinton said on the 50th anniversary of the bombings, “If I had the same information as President Truman, I would have done what he did.” That alone shows the US sees no moral obstacles to using such hideous weapons again. 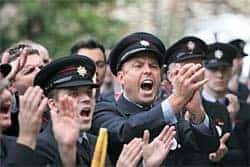 Firefighters are striking for us all