The vast majority of Iraqis want the US to get out

This article is over 17 years, 4 months old
IF IRAQ’S elections had taken place anywhere else, they would have been denounced by the "international community" as hopelessly flawed. If they had happened in Zimbabwe, they would have been cited by the White House as a reason for "regime change" and possible invasion.
By SABAH JAWAD Iraqi Democrats Against Occupation
Downloading PDF. Please wait...
Saturday 05 February 2005

We’ve just had an election which is anything but free and fair:

The initial claim by the US-installed regime of a 72 percent turnout was revised downwards to 57 percent of registered voters — but they refused to say how many Iraqis were actually registered.

Only one in nine of those exiled in the West from Iraq actually voted. No one can seriously claim they were kept away by an insurgency thousands of miles away. There are many other flaws in this election. But the biggest hypocrisy of George Bush, Tony Blair and their supporters is their attitude now to the central question in Iraq — the occupation.

The clearly expressed will of over 80 percent of the people of Iraq is for an end to occupation. Yet that was not on offer in the election, and is not on offer now from the occupiers. So much for their claims to be installing democracy.

The British government has refused to listen even to the modest proposal of the former foreign secretary Robin Cook, who has called for the occupiers to set a date now for their withdrawal. Instead Blair is seeking to use the election in Iraq to legitimise the occupation. That is contemptuous of the Iraqi people’s desire for genuine democracy.

Colonising powers have done this before. On 4 September 1967 the New York Times reported on elections in the puppet state of South Vietnam. “US Encouraged By Vietnam Vote: Officials Cite 83 Percent Turnout Despite Vietcong Terror,” ran the headline. But the resistance to the US in Vietnam continued for the next eight years.

In Iraq, we were told the so called “transfer of sovereignty” last June would end the resistance. It did not. We got the butcher of Central America, John Negroponte, installed as the power behind the throne. Resistance attacks on the occupation forces were running at 60 to 70 each day a few weeks ago. Now the figure is 80 a week.

The new Iraqi assembly has few powers. Its task is to draw up a constitution. But that has already been heavily circumscribed by the US when its Coalition Provisional Authority drafted the Administration of the State of Iraq law last year.

Contracts with foreign multinationals have already been signed. The US is completing the construction of 14 vast military bases, which are set to dominate Iraq permanently.

The assembly is also supposed to appoint a presidential council. We await the results of the poll last Sunday, but it is likely US favourite Iyad Allawi will manoeuvre with other parties to keep his position. That’s despite the fact that surveys last year for the occupation authorities themselves revealed he had the support of only 2 percent of the population.

This fake election will not change the reality of the occupation on the ground in Iraq. Most of those who voted did not do so to legitimise the occupation — they oppose it. Many people in the south of the country, where there is support for the Shia cleric Sistani, are already saying they do not expect their vote to be listened to.

The occupation has been looking to a divide and rule policy ever since it faced the combined resistance in mainly Shia Najaf in the south and mainly Sunni Fallujah in the centre last spring. No one should allow them to get away with that, no matter whether they participated in or boycotted the fake election. Most Iraqis do not want civil war, but they do want to control their own country.

There is an urgent need for the forces of the popular resistance to unite behind a programme of ending the occupation and fighting for a free, democratic Iraq. Ending the occupation is the precondition for progressive forces to properly take hold in Iraq. The international anti-war movement can assist greatly in that process. It means stepping up the mobilisation for days of action like 15 February, and for the 19 March demonstration.

The brutality of the occupation — and resistance to it — will continue so long as foreign troops and interests dominate Iraq. You can do something to end that and allow the Iraqi people to construct their own free society.

For more from Iraqi Democrats Against Occupation go to www.idao.org

Gains for the left

Anti-fascism around the country 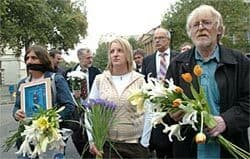