This article is over 10 years, 5 months old
Eyewitness reports from the frontline of the wave of rage sweeping the streets
Downloading PDF. Please wait...
Tuesday 09 August 2011

Riots of the poor and dispossessed spread through Britain this week. The police struggled to crush an uprising against their own racist brutality and poverty.

The riots reveal the deep-seated social tensions at the heart of Tory Britain.

The streets weren’t the police’s any more—they belonged to the angry, disenfranchised and the poor.

A young African-Carribean man pointing to the police told Socialist Worker, “These people are supposed to protect us—when I see them at night I run the other way. How can any of us feel safe when they’re shooting people?”

The spark that ignited the flames was the gunning down of Mark Duggan by police in Tottenham on Thursday of last week.

A peaceful protest vigil had marched to the police station on Saturday evening. People were furious that the police hadn’t even contacted the parents of the dead man.

Later, at a standoff, a 16-year old girl was beaten by a number of police officers. That’s when the rioting started.

“This is not the first time something like this has happened. There was Cynthia Jarrett back in the 1980s and Jean Charles de Menezes, now this guy in a cab.

“If those situations hadn’t happened then my high street wouldn’t be mashed up like it is now. These buildings can be rebuilt. That man’s life has gone and he’s not coming back.”

Then on Sunday night Enfield, Brixton and Chingford Mount in Waltham Forest rose up. The next night running battles continued for hours across London and other inner cities.

This is the biggest urban uprising in Britain for decades. Years of burning anger poured out. The police surrendered the streets across London. When they advanced they were met with missiles.

Adam, a college student, said, “This isn’t about race, it’s about class.” One teenager in the riots added, “I’m black and I have loads of white friends. But we are all the same colour.

“We are fed up with the police. They think they are higher than us, but they should be lower.”

A white man, around 50, said, “The government don’t give a fuck about us. Look around—it’s not just black people taking part, but everyone.”

In Hackney the riot lasted for hours on Monday. Hundreds of young people were running from the police but a bus was blocking their way. They surrounded it and suddenly realised the driver was still inside.

Two young rioters knocked on the door and beckoned for her to get off.

When she left the bus everyone clapped. Only then did they trash it.

Two African-Carribean pensioners were watching from the street. One said, “It’s not just this country, there’s uprisings everywhere. It’s the whole world. Everyone’s fed up, no one has anything.”

The media and the political establishment have responded with blatant class prejudice.

Every riot contains contradictory elements, precisely because it is spontaneous.

They emerge suddenly—but they are part of a wider revolt against an arrogant elite who live a life of privilege and have disdain for the poor.

People did steal. In some cases they stole necessities, in others luxuries—the ones we are bombarded with the idea that we will be unfulfilled unless we own.

One witness said, “This is about as empowered as many of these lads will ever feel. That’s the real tragedy.”

The summer was supposed to be politics-free—a time for us all to forget about phone hacking, police corruption and the government’s attacks on the poor. But instead the riots have plunged the government into yet another crisis.

It has terrified the establishment, who have come scuttling back from holiday villas in order to condemn thuggery.

“We’re all going through hard times and all the politicians are on holiday,” said one onlooker. “They think we’re all shit. The Tories mugged us to get in.”

There were signs that this was coming. The removal of the EMA education allowance led to the militancy of the student protests last year.

The cuts are biting and the rhetoric of “we’re all into together” sounds hollower by the day.

Even Nick Clegg predicted “Greek style unrest” if there were attacks on this scale.

One man told Socialist Worker, “We tried to stop this government with the student riots and they beat them up.

“I wouldn’t be surprised if they brought in the army and imposed martial law.”

At the time of writing the police have not gained control. When they do they will want their retribution.

And they tried during the disturbances. One worker told Socialist Worker, “I’m surprised it’s taken this long to happen. The police think they can get away with anything.

“A dozen of them caught one young guy coming out of a smashed shop. They handcuffed him and they battered him, they were bouncing off him. We need to do something about the system.”

It is only when people have fought back against police racism and inequality that anyone in power has been forced to acknowledge it.

This was a revolt of the poor. As a bus burned in Peckham in south London, Primark, Iceland and Clarks were looted. In Walworth Road, south London, the pawnshops and Argos were gutted.

One bus driver told Socialist Worker, “It’s not just the police, it’s Cameron. No one has anything, no one has pensions or anything to look forward to.

“It is understandable why young people are so angry. This hatred isn’t coming from nowhere.

Young people are sick of the police and sick of the lack of opportunity. And this frustration is going to come out.”

Winston Silcott, one of three men wrongly accused of the murder of PC Blakelock during the 1985 Broadwater Farm riots in Tottenham 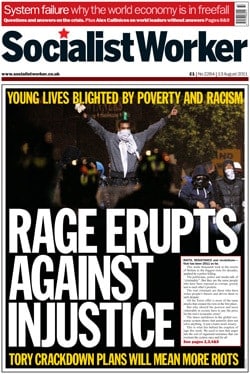