The Tory conference in Manchester this week saw their party leadership in turmoil.

Many called for him to go, or hinted that he should be sacked.

Johnson set out a series of “red lines”, which are meant to show he has a tougher line on Brexit and to cause May trouble in negotiations.

He wants to force May either to resign or sack him, while positioning himself as a future party leader. He was set to speak to the Tory conference as Socialist Worker went to press on Tuesday.

The row is a result of a serious split inside the Tory party over Brexit. A big chunk of the Tory membership want an even more nationalist and racist version of Brexit.

But the Tories’ friends in big business demand a “soft” Brexit with access to the EU’s neoliberal single market.

This allows them to trade without tariffs, and protects their interests with rules that prevent “interference” from left wing governments or trade unions. 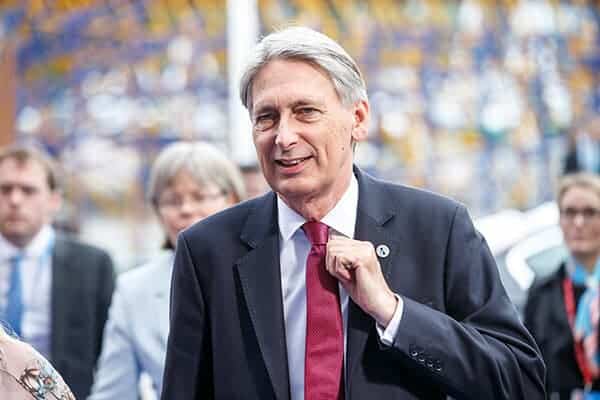 The Tory leadership is caught in between the two.

May tried to overcome this split by calling the snap general election, hoping to win a bigger majority and strengthen the government’s hand in EU negotiations.

Instead May came out weaker, plunging the Tories further into crisis.

Johnson hoped to challenge her by positioning himself as a “godfather of Brexit,” as one “friend” told the Financial Times newspaper this week. Several top ministers hinted strongly that May should sack Johnson.

One right wing magazine columnist reported that Tories at the conference were uniting around the slogan, “Jihad on Johnson”.

But many Tory conference delegates—as well as the Sun and Times newspapers—backed Johnson. And May couldn’t deny he was “unsackable”.

In a sign of how rattled and desperate the Tories have become, Hammond spent a large chunk of his conference speech on Monday having to defend capitalism. “We have to explain why and how the market economy works,” he said.

But that wasn’t enough to convince the Tories’ big business backers. Caroline Fairbairn, head of the bosses’ CBI group, said the speech showed “a government strong on diagnosis, but weak on action”.

The severity of the Tory crisis is shown by their traditional backers attacking them.

We have to seize on their weakness to get rid of the whole Tory rabble.

Chants of, “Tories out—Corbyn in” rang out in Manchester on Sunday. Tens of thousands of protesters joined the People’s Assembly demonstration outside the Tory party conference.

The demonstration brought together anger against all of the Tories’ attacks.

“We’re here to try and get a better life for our children and grandchildren.”

There was a large turnout from health workers in the Unison union, who are fighting the Tories’ 1 percent public sector pay cap.

Jan, a Unison member and nurse from Sefton in Merseyside, told Socialist Worker, “I take home less in wages now than I did in 2015. Staff are demoralised, but they are also willing to fight.”

Alison, a UCU rep at a college in Huddersfield, agreed. “I would support a strike over the pay cap,” she told Socialist Worker.

There was optimism among marchers that things can change.

At the front of the march there were chants of, “What do we want? A Labour government. When do we want it? Now.” Jan said, “Labour is what we want, they’re are the ones for us.”

Tasha, who was marching with Justice4Grenfell campaigners, was hopeful about Labour.

“As soon as they’re in I think things can change,” she told Socialist Worker.

Tyler, a school student, added, “I think we can only get rid of the Tories electorally, but Theresa May might feel the pressure to resign.

We need to use the mood of anger and optimism to feed resistance. Union leaders have talked tough about taking on the pay cap—now they need to ballot their members for strikes.

A serious fightback can force the Tories from office.

Protests at the Tory party conference also involved direct actions by the People’s Assembly Against Austerity and Disabled People Against Cuts (Dpac).

Activists stormed the meeting shouting “Tories out” and held up the start of the meeting for around 15 minutes. Some Tory activists tried to snatch placards from the protesters’ hands.

One protester challenged Rees-Mogg over his “despicable” anti-choice opposition to abortion.

Meanwhile on Sunday activists from Dpac blocked a Manchester tram line in solidarity with a group of protesters who were kettled.

Police arrested two Dpac activists in their attempts to forcibly remove them from the tram lines.

Dpac reported that one activist Dennis Queen was charged with public nuisance while another, Sharon Hooley, was given a caution.

Dpac also reported that “a veteran activist in his 80s was left badly bruised” after being “man-handled”.

No revolution on tuition fees

Theresa May promised a raft of new policies aimed at students that were dubbed a “revolution” by the right wing Sunday Telegraph newspaper. 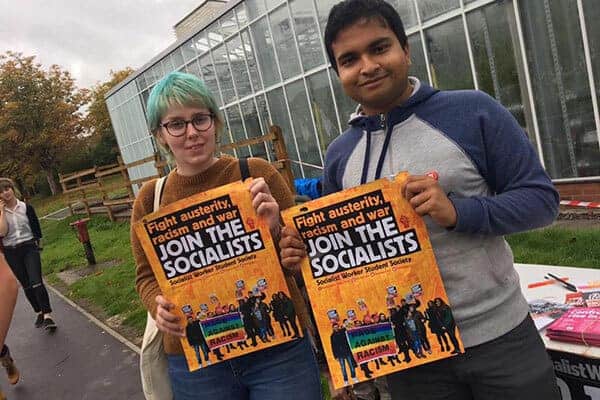 And she also said the Tories would raise the income threshold from which graduates have to start paying back loans to £25,000 a year.

But this is only for people who began university in 2012.

For people who started their studies before that the threshold is much lower at £17,775.

And the threshold hasn’t risen for five years. This means that May’s new one doesn’t keep up with inflation.

May’s announcement backfired. It drew attention to the high levels of student debt and the low income at which they have to be paid back.

Tory work and pensions minister David Gauke has come under fire from his own MPs over the shambolic rollout of the new Universal Credit (UC) benefit.

UC is part of the Tories’ welfare “reforms” that have devastated many people’s lives. UC makes it easier to cut and sanction claimants by merging six benefits into one.

They include jobseeker’s allowance, income support and housing benefit.

Some 42 percent of families in arrears getting UC said it was due to the waiting time, payments being delayed or stopped, or errors in the system. 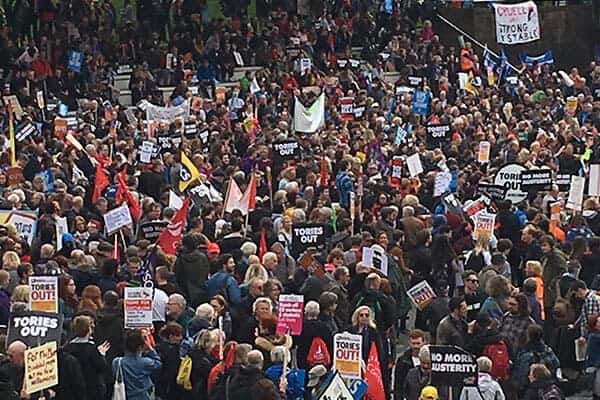 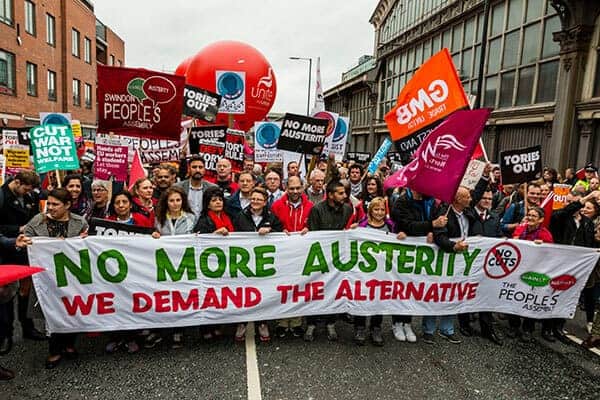