‘This deal is a springboard to unionise our workplaces’

This article is over 13 years, 7 months old
A sign of the growing confidence many workers feel could be seen at a Unite union meeting for tanker and wagon driver representatives from many different companies on Wednesday of last week.
By Richard Allday
Downloading PDF. Please wait...
Tuesday 24 June 2008

A sign of the growing confidence many workers feel could be seen at a Unite union meeting for tanker and wagon driver representatives from many different companies on Wednesday of last week.

This was a day after the Shell drivers’ victory. The meeting celebrated the union’s strong support for their strike and the solidarity that other drivers showed to them.

There was a very positive mood among the over 40 representatives. As Tony Woodley, Unite’s joint general secretary, put it, the Shell drivers had just driven a ‘coach and horses’ through the government and bosses’ pay restraint plans.

Union leaders were very clear that they saw this as a massive boost for every pay campaign.

Len McCluskey, Unite’s assistant general secretary, spoke about what a great achievement for the union movement the Shell result was.

The fact that a group of workers had won in such a prominent dispute would inspire others. The union wants to roll the lessons of this dispute out way beyond the oil sector.

Tony Woodley said that while the media would try to say the Shell dispute only helped a small elite of well-paid workers, he saw it as a victory for low paid workers in the private and public sector, and the union.

He spoke of the need for a mass unionisation campaign of workers across the oil and truck sector.

This was great news for activists like myself. The unions need to use the outcome of the Shell dispute as a springboard to recruit – as it shows what organisation can get you.

Richard Allday is a wagon driver and the chair of Unite’s London and Eastern road haulage trade group. He writes in a personal capacity. 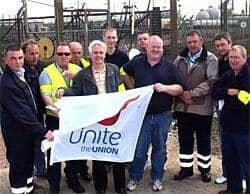 Shell drivers' victory shows how we can beat pay freeze