This is a fight for our livelihoods, say Remploy strikers

Hundreds of workers marched through Chesterfield in Derbyshire last Saturday to support Remploy workers fighting for their jobs.

The march was the culmination of a week of strikes by the disabled workers. Workers struck for five days in Chesterfield and four in Springburn, Glasgow.

They were joined last Thursday by other Remploy workers around Scotland as factories in Leven, Cowdenbeath and Clydebank also walked out.

Colin Cuthbert, shop steward at the factory in Leven, Fife, accused the Tories of hypocrisy over disabled people and the Paralympics.

He said, “Our gold medal is our job but all Cameron can do is jump on the bandwagon and praise Paralympic athletes. That’s just sport—we are fighting for our livelihoods.

“On the one hand, Cameron praises the achievements of disabled people —but on the other, he wants to close our factories.” Remploy has closed 24 factories in the last month.

Shop steward Linda Menzies at the Cowdenbeath factory told Socialist Worker she is furious at Remploy’s management. “We definitely feel we’ve been sold down the river,” she said. “There is such uncertainty, as we do not have a clue what is happening or when we are going to find out.”

Lyn Turner from the Unite union said, “It is rank hypocrisy that the government tries to make political capital from the achievements of people with disabilities inside the Olympic stadium when, outside its walls, they are intent on destroying their livelihoods.”

Workers in Chesterfield have voted to strike again for five days starting from Monday of next week.

Yet again the determination of the Remploy workers has been shown. What is lacking is that being matched by the full force of the union movement showing them solidarity.

Another factory was put at risk of closure last week. Bridgend Remploy factory had been down to be sold to a private firm rather than simply shut, but the buyer has pulled out.

Remploy bosses were refusing to say what will happen to the factory as Socialist Worker went to press. Workers expect that it will now close. 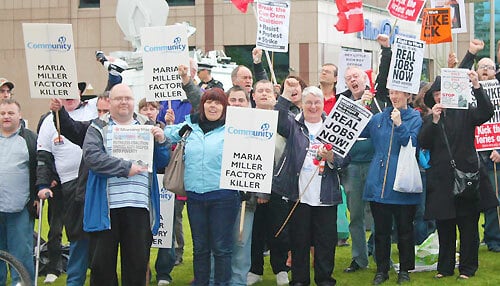