Anti-Nazi campaigners won a superb victory on the streets of Birmingham last Saturday.

The racist English Defence League (EDL) is touted as the street fighting wing of the Nazi British National Party (BNP). It tried to hold an anti-Muslim rally in the city centre.

The Nazis hoped to whip up race hate and create a climate of fear in Birmingham.

Instead thousands of people, from all backgrounds, forced them to flee the city.

This is a shining example of the response we need whenever the Nazis try to organise.

Some people argue that to confront the Nazis is denying their “freedom of speech”.

Allowing them to whip up racism and division is not only undemocratic—it is dangerous.

When the Nazis begin to organise in an area, black and Asian people, trade unionists, LGBT people and others face intimidation and brutal attacks.

But when they are are forced to retreat, it gives confidence to everyone who opposes them.

It shows that people don’t have to put up with living in fear.

The BNP tries to put on a “respectable” face and gain influence by winning elections.

This weekend it will hold its “family-friendly” Red, White and Blue festival in Codnor, Derbyshire.

We need to strip the mask away. The BNP’s ultimate aim is the destruction of democracy.

That is why we need to physically confront the Nazis wherever they try to organise. 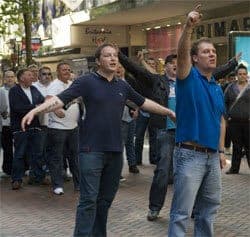