This isn’t what we really want

This isn’t what we really want

NEW LABOUR boasts of support from Thatcher-loving Gerri Halliwell. They should listen to senior nurse Sue Halliwell, who gave evidence at an inquest last week. Her testimony gives an insight into conditions in a cash-starved NHS. Leonard Stephens was 88 when he died earlier this year in the accident and emergency department of William Harvey Hospital in Ashford, Kent.

Sister Halliwell gave evidence that when she arrived for her shift there were 61 patients in the casualty department. The pressure was so great that they had run out of trolleys and were attending to patients in chairs.

Two doctors saw Mr Stephens but failed to diagnose a fractured pelvis. He had already waited for three and a half hours for an ambulance to collect him from his home. He died 12 hours later.

Sister Halliwell said the only other staff on duty were two staff nurses and two nursing auxiliaries. She believed that five trained nurses and seven or eight auxiliaries were needed. She told the inquest, “I felt the department was unsafe. I asked if we could divert patients to other hospitals. “I was told that all hospitals in the area were in the same situation.” The jury returned a verdict of accidental death.

Achin’ to be rich

THE FAMILY of jailed Tory MP Jonathan Aitken have been speaking movingly about their new attitude towards material wealth. Alexandra, Jonathan’s daughter, has been seen at jumble sales trying to find something to wear on dates with her 40 million businessman boyfriend.

Alexandra says, “Luxury isn’t crucial at all. My mother says that gold chains are the heaviest to carry and tells me not to marry a rich man.” This is the same mother, Lolicia, who conspired to transfer all of Jonathan’s assets to her name to avoid paying millions owed to the Guardian when his libel case against the paper collapsed. She is now fighting doggedly to grab a share in Aitken’s 2.4 million sale of their Westminster mansion and their 500,000 Kent home.

This is the same woman who now lives in luxury in Switzerland where, coincidentally, Aitken’s former business associate Said Ayas claims he placed 2.7 million for the Aitkens in a Swiss bank account.

ARE YOU sick of experts churning out self help books and TV appearances telling you to stop making a mess of your life and relationships? Ellen Fein is one such guru. She wrote The Rules for Marriage, a guide to the perfect wedded bliss. It topped the bestseller lists on both sides of the Atlantic.

She made a fortune out of such advice as telling women not to be too clever and to keep men guessing. Ellen Fein has just announced she’s getting divorced.

SIR KEN Jackson, Blairite general secretary of the AEEU union, faces a problem. He will reach the union’s official retirement age of 65 next spring. But he wants to continue in the job. The solution? The union’s executive will move a motion at the next AEEU conference proposing a rule change that would enable Sir Ken to continue for an unspecified period as general secretary.

THE NEW boss of Railtrack, John Robinson, appears to have all the right qualifications. He used to be boss of a company that produces Elastoplast.

THERE IS no Socialist Alliance candidate in Hastings. That did not stop Alex Scrivener standing as a Socialist Workers Party candidate in mock elections at Helenswood and William Parker schools. Students rejected the Tories’ scapegoating of asylum seekers echoed in many local papers on the south coast. Alex won the election with 38 percent of the vote.

This is so disgusting you must take a look

THE DAILY Mail was in a great lather last week over plans for an exhibition of “The Victorian Nude” at Tate Britain. The paper denounced what it saw as a “a naked attempt to drum up business” and “a Victorian peepshow”. How did they illustrate the article? With seven pictures of Victorian nudes.

WHILE THE press were concentrating on John Prescott’s fisticuffs, another candidate was also involved in violence. Trefor Morgan, a Sheffield city councillor and Lib Dem candidate, has had to resign after being arrested while canvassing.

He was wearing a bright yellow rosette with red braces. Witnesses allege he threw pepper at a barking dog before returning to his car. As he reversed, Barbara Johnson became caught on his car door and was dragged along the road. Morgan was arrested on suspicion of assault, carrying an offensive weapon and cruelty to an animal.

A MAN has won 50,000 damages after his neck was broken while he was handcuffed in the cage of a police van. The driver performed unnecessary emergency stops and violent swerves which threw him about. Peter Rutherford, 58, told the High Court in London last week of his “ride from hell” following his wrongful arrest for being drunk and disorderly.

“I HAVEN’T got a butler. We just have three people who look after the house. End of story.”

“EVEN MY butler has a butler.”

“DANCING, hugging the other sex set to music, is sensual and clearly caters to the lust of the flesh. Line dancing is as sinful as any other type of sexual gestures and touchings. It is not a crucifying of lust but an excitement to lust.”

“MAYBE he’s getting it confused with lap dancing.”

“AFRICA HAS an AIDS crisis because black people like bonking too much.”

“TONY Blair phoned the commissioner of the Metropolitan Police on the morning of 2 May to offer his thanks to the service and express his delight at what he considered to be a great triumph for the police.”

“POLITICALLY we have taken over not just the centre but over onto the right as well. Everyone is saying that the Tories need to stake out some new territory. Well, there isn’t any new territory-we’ve got it all.”

“THERE HAS never been a better time to be rich than during the last four years.” 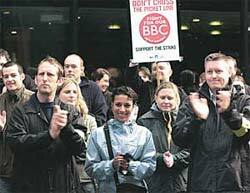 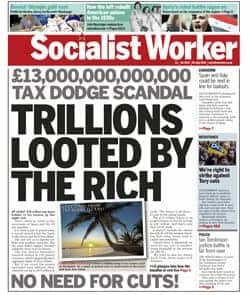 Trillions looted by the rich

Tribunal rules against Ineos at Grangemouth