This article is over 7 years, 2 months old
By Nick Clark
Downloading PDF. Please wait...
Thursday 28 May 2015

Up to 3,000 people marched through central London last night, Wednesday, against the new Tory government as it announced more attacks in the queen’s speech.

Several hundred protesters gathered in Trafalgar Square before marching down Whitehall to Downing Street, where more protesters were waiting at a protest called by the People’s Assembly.

One protester, Will, told Socialist Worker, “I’m 16 and already I can tell there’s something fundamentally wrong with society. It’s obscene that cuts are being pushed on the poorest and the people who caused the crisis—the bankers—were never punished”.

Police tried to stop the protesters from marching, but were swept away as thousands of people pushed through on their way to Parliament Square.

The cops were run ragged as the protesters marched through central London.

They held an impromptu rally at Trafalgar Square before blocking traffic on Oxford Street and holding a brief sit-down at Piccadilly Circus.

And Ukip MP Douglas Carswell was given a fright when he ran into the march at St James’ Park tube station.

He had to be led away by police as protesters surrounded him chanting “racist”.

The marchers finished back at Downing Street with a call to join the National Gallery protest in Trafalgar Square at 1pm this Saturday.

The protesters were mostly young. Many of them were frightened at the prospect of five years of Tory government—but they were also very angry. The demonstration came together from a number of protests called by different organisations including the People’s Assembly.

Katy was one of the protesters. She told Socialist Worker why she joined the protest.

She said, “Education and the NHS in particular are really important for me. Everyone’s scared to be honest about what the Tories are going to do.

“I don’t think we’ll get the Tories out, but people need to fight for what we can win from them”.

“Now they’re talking about stopping refugees from trying to cross the Mediterranean—but one of the biggest push factors are wars caused by Western imperialism”.

Will added, “We need to show them that we’re not going to stand for this. We need protests and strikes like there were against Margaret Thatcher. David Cameron’s not strong enough to deal with that”.

Hundreds also joined protests against in Leeds, Birmingham and Liverpool.

They are part of a wave of protests following the Tories’ election victory earlier this month.

They are building up to the national demonstrations called by the People’s Assembly in London and Glasgow on 20 June. 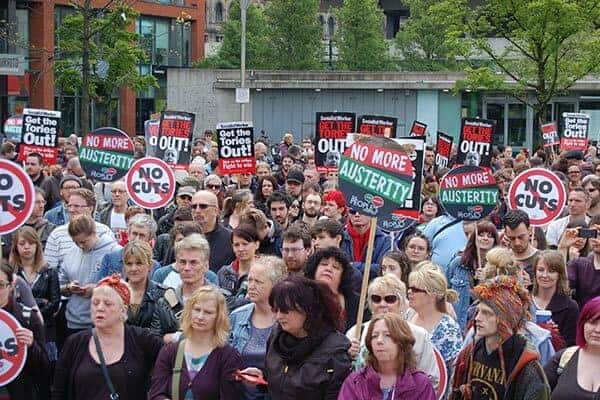