This article is over 10 years, 11 months old
Thousands of university, college and school students – joined by workers – are marching in London and Manchester against Tory cuts to education, fee rises and attacks on jobs and services.
Downloading PDF. Please wait...
Saturday 29 January 2011

Thousands of university, college and school students – joined by workers – are marching in London and Manchester against Tory cuts to education, fee rises and attacks on jobs and services.

The revolution in Tunisia and uprising in Egypt have clearly inspired the marches. Marchers have chanted, “Egypt, Egypt everywhere.”

A student in Manchester has made a placard reading, “Egypt, Tunisia thank you for the inspiration”. In London one said, “Walk like an Egyptian.

Socialist Worker spoke to protesters in London as they assembled to march.

Aisha, an FE student from Camden in north London said, “I’ve been on all the demonstrations, but some of my friends are here who haven’t been out on the protests before.

“I like the slogan ‘This is only the beginning’, because it’s going to be a long fight against this government.”

He said, “Lots of people who want to go to university won’t be able to and people will definitely be affected by the cuts to EMA [Education Maintenance Allowance]. The government is making the wrong people pay – the bankers are getting hundreds of thousands in bonuses.”

For workers, the student protests have been an inspiration.

A GMB rep joining the protest in London told Socialist Worker, “I’m here to show solidarity with the students. I’ve got a daughter who has just gone through university and there is no way she would have been able to afford £9,000 a year fees.

“I’m also here to say that I don’t believe in these cuts. We’ve got to stick together workers and students. I think that the TUC demo on the 26 March can give people confidence to fight.”

UCU lecturer Vicky Margree works at the University of Brighton. She said, “We face 100 percent cut in arts and humanities funding which will hit universities hard. And the new fees will make university unaffordable for the majority of people.”

Kelly Rogers, a Unison organiser, told Socialist Worker, “Unless we show solidarity with younger people we may as well give up. Students have led the way and enthused workers, showing us how to fight.”

In Manchester a student feeder march joined the main rally in Platt Fields.

Jemma from Barnsley College told Socialist Worker, “This is the first of the protests I’ve been on. They are cutting my EMA. It costs nothing compared to what they spend on arms– the government needs to get its priorities straight.”

Jamie, a lecturer and UCU member from Manchester University said, “I wanted to come out today to support students. It is so important that we fight for their future and for our own too.”

Connexions workers and youth workers joined the protest in Manchester. There were placards reading, “Youth workers against the cuts.”

Jenny, was one of a group of youth workers in Manchester. She said, “I’m here because of the cuts we face to services. Young people are having their futures stolen. It’s just not fair.”

Tess agreed, “Why close down youth centres, they are so essential. In a few years we will hear about youth crime going up, and who will be to blame for that – the government will.”

Manchester University student Sophie said, “I’m here today because I got into university, but my sister who is a few years younger than me isn’t going to get EMA and will have to pay higher fees. We won’t be able to afford it. Her whole future is being ruined by the Tories and Lib Dems.”

The London protest was called by the Education Activist Network and NCAFC together with the UCU and PCS unions. It is supported by the GMB union as well as CWU general secretary Billy Hayes. The NUS, TUC, UCU called the protest in Manchester. 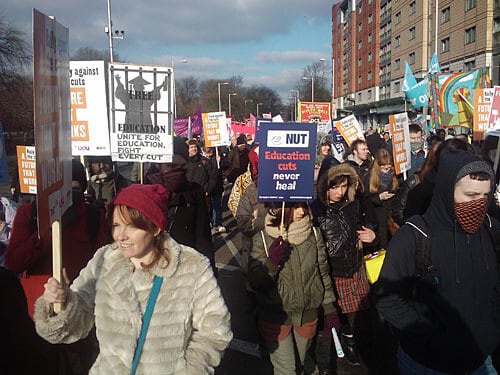 Pictures of student protests in London and Manchester, 29 January 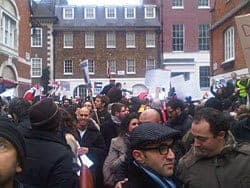