The protest was one of the biggest marches against nuclear weapons in Scotland for years.

The streets were filled with working class families, independence campaign groups, trade unionists and political parties. Their main slogan was “Bairns not bombs” and chants of “Welfare not warfare” rang out along the march.

Student Lotte explained to Socialist Worker why she thought it was so big.

She said, “A lot of people don’t like Trident and want to get rid of it. Instead of the money being wasted it could be spent on education, the NHS or childcare.”

As well as Scrap Trident placards people also carried placards against the Saudi Arabia-led assault on Yemen as well as against Nato. Others simply read “Hope over Fear”.

Some homemade placards were rather direct, with one displaying the simple message “stick your nukes up yer a*se”.

Jacob McBane was one of the younger activists on the demo at 15 years old. He told Socialist Worker he thought Trident is “a waste of money with no realistic use”.

All the main Westminster parties are committed to spending £100 billion on Trident replacement while also being committed to austerity. It will be a big issue in this general election.

Jacob added, “It’s a bit hypocritical for any party to say we need cuts when they are spending so much on it.”

Sturgeon reiterated the SNP’s opposition to Trident and said scrapping it remained a “red line” it would not cross in any negotiations to support a Labour government.

Trade Unionist and Socialist Coalition (TUSC) supporters joined the march as did many local groups of the Green Party and big contingents of the SNP.

For João, a member of Left Bloc in Portugal, the issue was not just one for elections.

“It’s important anytime,” he told Socialist Worker. “Trident is totally unacceptable because if they’re spending money on nuclear weapons and you have poor people, there must be a problem.”

Independence campaigners were also out in force. Women for Independence, Yes Scotland and Radical Independence Campaign groups all brought banners.

The politicisation seen during last year’s independence referendum continues in Scotland with today’s demonstration just the latest expression of it.

Although the SNP look set to take the majority of seats in May’s general election, many are looking beyond the party.

Paul Anderson is an anti-austerity campaigner. He said he joined the march “to support the main thrust of independence and bring us towards a more socialist society”.

He said, “I’m hopeful there can be a leftward shift, spearheaded by Scotland.”

There is all to play for. 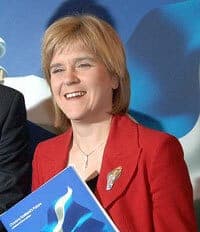