Thousands of firefighters lobby against cuts

More than 2,000 firefighters rallied in Westminster Central Hall, London. Hundreds then protested outside Downing Street while others went into parliament to lobby MPs.

FBU general secretary Matt Wrack told the rally, ‘We face a pay freeze and huge attacks on jobs and conditions as part of an ideological, political assault against public services.”

He argued unions had to support each other. ‘If it means striking together, then so be it,” he said. “We are entering the fight of our lives.”

Mark Serwotka, general secretary of the PCS civil service union, said to long applause, ‘Firefighters, teachers, civil servants are all facing cuts. It makes no sense to fight individual battles—we should all go on strike together.”

He added, “If you have to strike again, whatever day you choose, PCS will 100 percent support you. People have to decide which side they are on.’

Praising the student protests, he said, “If we can’t peacefully persuade then we’ll have to stand up for ourselves and force them to change direction.”

Left wing Labour MPs John McDonnell, Katy Clark and John Cryer also spoke to the rally. Katy Clark said, “We’re going to see the most vicious attacks on the working class we’ve ever seen. If these cuts go ahead in the fire service, lives will be put at risk.”

And John Cryer pledged to be “on the picket line every day” the FBU struck. “The public’s on your side,” he said.

London firefighter Sian Griffiths was suspended last week after bosses accused her of “bullying” a strike-breaker—but the firefighter of 26 years and prominent union activist has not been told what the actual allegation is, or who made the complaint.

She got a minute-long standing ovation at the rally.

She told the rally, “I am not going to give up. It’s not about me, it’s about us, it’s about staying strong. When they come for you, stick together and fight back.”

FBU president Mick Shaw said she is an “exemplary firefighter” and “has the full support of the Fire Brigades Union and every one of its members”.

And Ian Leahair, the union’s executive council member for London, pledged, “There will be no back-to-work agreement unless she’s reinstated.”

He said, “This dispute is not yet finished in London. Far from it.

He also promised, “This dispute will not be resolved until they back down and pay that money back.”

“When we called off the strikes it wasn’t because the FBU in London backed down… it was because they [the bosses] blinked first and moved their position.”

But he added, “We’ll put the strikes back on if this dispute is not settled.”

It is vital that the rank and file gets organised now to hold the officials to this. 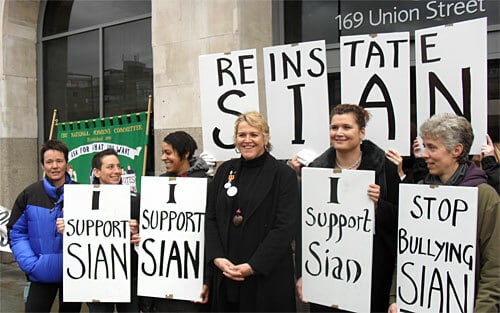