This article is over 12 years, 10 months old
The RMT transport union began a strike ballot of its 10,000 members on London Underground and Transport for London this week over pay and job cuts.
By Matthew Cookson
Downloading PDF. Please wait...
Tuesday 24 March 2009

The RMT transport union began a strike ballot of its 10,000 members on London Underground and Transport for London this week over pay and job cuts.

Tube workers and their supporters protested over pay, job cuts and management bullying outside the two companies’ offices in central London on Friday of last week.

The ballots will close on 8 April.

Bosses at London Underground are threatening to tear up an agreement aimed at safeguarding jobs and have refused to rule out compulsory redundancies.

They are also trying to impose a five year pay deal tied to the RPI rate of inflation, which could mean a pay cut.

Transport for London is also threatening compulsory redundancies as part of a £2.4 billion cuts package, and has made no pay offer.

There is deep anger among tube workers.

Yemi Babalola, a track worker, told Socialist Worker, “I don’t think it’s right for management to lay people off, especially when you’ve got managers making tens of thousands of pounds and not losing their jobs.

“They want to get rid of 1,000 administration workers. These are people who have to support their families. Where will it stop? Who will be next?

“Management are also trying to get rid of the agreement we had guaranteeing people that they will be found another job on the network if they lose their job.

“Taking action is the only argument that management seem to listen to. We have to vote yes in the ballot to show them we’re all together.”

Lorna Tooley, a station supervisor, said, “Management don’t want to pay us properly, even though we’re the ones keeping the tube running.

“I’m sure management aren’t worried about paying their mortgages, unlike us.”

Roy Carey, an RMT rep, added, “Everyone’s worried about losing their jobs, and are totally opposed to the cuts as they will have a detrimental effect on public safety.

“The government claims it is investing in public services, but what’s happening on the tube then?

“This is a very important fight for workers during the recession.”

The RMT is also very concerned about the growing numbers of victimisation of its members on the tube. The union used last week’s protest to take up this issue.

Steve Hedley, RMT London regional organiser, told Socialist Worker, “The worst example of this is a black woman rep who has given evidence against the bullying of workers has now been accused of racial harassment.

“This woman has a long history of anti-racist activity and the accusations are turning reality on its head.

“The case is indicative of management tactics.”

Activists are now mobilising to ensure that there is the biggest possible yes vote in the ballot.

Stop the racist EDL in Tower Hamlets on 20 June 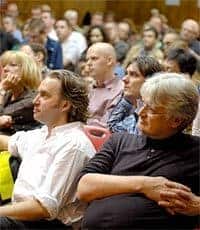