Thousands of journalists, technicians and other workers walked out at the BBC today, Thursday, in protest at the extra workload and stress caused by cuts at the corporation.

The NUJ and Bectu unions, which represent around 8,000 BBC workers, called the national 12 hour strike.

“This is not the same BBC that I started working for more than 16 years ago,” World Service journalist Jahan told Socialist Worker. “It’s just money, money, money, that’s all that management care about. They’re doing this at the cost of people’s health and livelihoods.

Jahan was one of over 100 workers who walked out of New Broadcasting House in London as the clock struck 12 noon at the start of the strike.

The BBC has committed to axing 20 percent of its budget over the next five years. Over 1,300 jobs have been scrapped under the plan, but the same level of output is still expected of the workers who remain.

The unions are calling for a 6 month break in the cuts to review what is happening to workers and the service.

David is a studio technician in the Bectu union. “It’s good to have the two unions out together,” he said. “We work side by side and see what’s going on. There is no doubt that people are struggling to cope. There are big safety risks in television studios, and when people are tired and stressed and feeling over worked that’s when mistakes can happen.

“The BBC want it to be run on a shoe string while still making big payoffs to management and still producing the same output. Something’s got to give.”

General secretaries of both unions addressed the strikers. Bectu general secretary Gerry Morrissey said, “The dispute is about the BBC’s failure to look at the wellbeing of the workforce. In a recent survey, only 46 percent of staff said they felt like they could cope with their workload. Management’s only response has been more redundancies.”

There were some 50 pickets at BBC studios in Salford where much of production is being moved to as part of the cuts scheme. Union members walked off the job, including those from consumer affairs programme You And Yours. NUJ official Keith Murray told the rally outside Quay House, “Today we have a truly UK wide strike.”

Both unions are now taking part in a work to rule.

Journalists are out to save their jobs 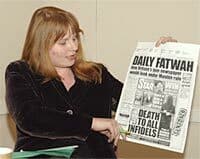