Time for real action at Corus

This article is over 11 years, 9 months old
Steelworkers at Corus in Teesside are to be balloted for industrial action over the closure of their plant.
Downloading PDF. Please wait...
Tuesday 27 April 2010

Steelworkers at Corus in Teesside are to be balloted for industrial action over the closure of their plant.

The “mothballing” of Corus steel in Redcar in February cost some 1,600 jobs.

Industrial action stalled as the company claimed to be finding a buyer.

But now the unions say the company failed to even turn up for a meeting to discuss the future of the plant.

The National Steel Trade Union Co-ordinating Committee – which includes the Community, Unite, GMB and Ucatt unions – said, “Due to a lack of progress and a lack of clarity over securing an alternative for Teesside we have begun ballot proceedings today.”

But it is still not an actual ballot: it is just “legal and administrative preparations” for a ballot.

The ballot has already been delayed so long that most of the jobs have already gone.

Only 200 workers are being retained as part of a part government-funded training scheme.

Workers need to keep up the pressure on the unions to make sure the ballot happens.

But saving Corus will take much more than a belated, “symbolic” strike in Teesside.

A Corus worker was killed at work last week. Thomas Standerline, 26, died after an incident on the continuous casting site at the Scunthorpe site. The Health and Safety Executive is investigating. 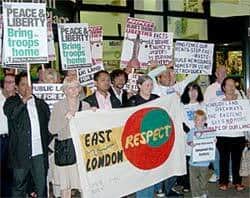