Time to humble Blair at home

Time to humble Blair at home

THE HIGH priest of neo-liberalism. This is how Tony Blair sees his world role. This week in Brazil he spoke to a gathering of businessmen. He urged them not to lose their nerve over privatisation and free market reforms.

Then he told an audience in Argentina that swingeing spending cuts there were “a very significant step forwards”. He said that the governments of Europe must do the same. These statements come just after Blair took the hardest public line of all the G8 world leaders against the protesters in Genoa.

Blair displays the same arrogance at home. He has turned the position of Labour Party chairman into his own personal appointment, spitting in the face of the party’s rule book. Blair is determined to push ahead with more privatisation of our services. But he faces a rocky ride.

Two issues dominated the Labour Party national policy forum last weekend. This is the leadership body set up by Blair to vet the policies discussed at the annual conference.

That is because, they say, the Human Rights Act means it would be unfair to shareholders to buy the railways back at current share prices because they are at rock bottom. The railways would have to be bought back at the average share price over the last few years. So never mind the human rights of passengers or rail workers-just think of the poor shareholders.

The second issue was student fees. Blair admitted to the policy forum that this is the issue he faces the most criticism over. Some sort of vague review was promised.

Privatisation and private sector involvement in services was also discussed. No votes were taken, and union leaders wrongly did not provide a focus at the meeting for the anger that exists over the issue amongst their members. But Labour Party insiders say things will not end here.

They report a definite mood amongst trade union delegates to fight the Labour leadership over privatisation at the party conference in the autumn. The mood to resist is not confined to privatisation. It is also there over Blair’s backing of George Bush’s crazy “Son of Star Wars” missile plan. Union leaders can’t be trusted to fight. And rank and file Labour Party delegates will be bullied by party henchmen to shut up.

We need thousands outside the Labour Party conference to make sure there is no doubt about the scale of the opposition to privatisation. Blair is arrogant, but he is also in a minority. Loathing of privatisation exists on every estate and in every workplace.

We must keep on campaigning, including over tube privatisation.We must build resistance in hospitals and schools, wherever and whenever privatisation is threatened. We must organise for the protest at the Labour Party conference on 30 September to ensure there are thousands there determined to crush Blair’s arrogance and his policies.

This sort of mobilisation can lay the basis for a fightback, whatever happens inside the conference hall.

Protest against the Toxic Texan 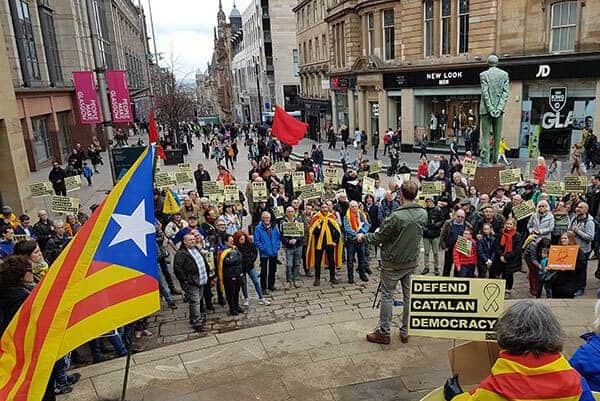 Reports round-up: Anger grows over pay and cuts in Scotland