Together we can beat Tories’ war on the poor

This article is over 8 years, 9 months old
The attacks on benefits are brutal, but united we can defeat them, writes Dave Sewell
By Dave Sewell
Downloading PDF. Please wait...
Friday 05 April 2013

Just days before the Tories’ bedroom tax came into effect, more than 25,000 people protested in over 50 cities across Britain.

Last week he was called a “ratbag” by protester Willie Black in a conference he addressed in Edinburgh. And four churches came together for an Easter message to condemn measures that would drive many thousands into poverty.

The head of the national housing federation made headlines pointing out that the bedroom tax will actually cost the government more in housing benefits. Tenants will be driven out of social housing and into smaller but more expensive private rents.

The beleaguered minister ended up on the front page of the right wing Sunday Telegraph admitting he’d “given up” on his goal of slashing the cost of welfare.

He desperately claimed on Monday that he could live on £53 a week. Last month he made several symbolic retreats over the bedroom tax.

And the April launch of the new combined and capped Universal Credit benefit has gone from being national to four towns to now being limited to just one jobcentre. Many are sceptical that the government’s IT system will be able to cope with the national rollout in October.

These are just tiny changes compared to the assault that’s still going ahead. Between the bedroom tax, the cut to council tax benefits and other attacks, the government is taking billions of pounds from more than 10 million people.

Many unemployed or disabled people will be hit by two, three or more of the cuts in short succession.

But the revolt against the bedroom tax is growing. The biggest protests last Saturday were in cities that have seen tenants’ and supporters’ meetings in all the poorest areas—and more have been planned.

There were meetings in more than 20 areas around Glasgow in the weeks running up to the demonstration. At least 8,000 people marched, followed by a mass meeting of the West of Scotland Anti Bedroom Tax Federation to plan further action.

Activists in Tottenham, north London are building for a “1,000 mothers march for justice” against the welfare attacks.

So far less than 1 percent of those affected by the bedroom tax have left their homes, and many more have pledged to stay and fight. Those who fall behind on their rent could face eviction proceedings in the summer, though some social landlords have already pledged not to do this.

We can force the Tories to abandon their war on welfare if we can link up in a national movement.

That’s the aim of the national summit for benefit justice in central London on 11 May. Every tenants association, anti bedroom tax campaign and housing workers’ union branch should try and send someone to take part.

Your pain, their gain

Around 700 people turned out in London, chanting “can’t pay, won’t pay, axe the bedroom tax” as they marched down Whitehall. People hung “the shirts off their backs” on the railings opposite Downing Street.

There were a similar number in Liverpool, where feeder marches from the north and south of the city merged in front of St George’s hall. 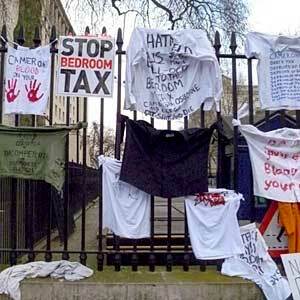 Londoners left the shirts off their backs (Pic: Vaughan Melzer)

There were more than 60 demonstrations around Britain. Some 300 people marched in Cardiff and another 150 in Swansea. There were around 1,000 protesters in Edinburgh.

Manchester’s march was smaller than on the previous day of action as a section of the Labour Party stayed away. But Labour councillors who did turn up pledged to put a motion to the council calling for no evictions.

And it wasn’t just the big cities. Dozens of people turned up in Barnsley after a meeting on its Athersley estate. “One woman’s daughter set up a bed in the high street,” said George Arthur. “Passers-by queued up to sign a petition calling on the council to guarantee it will not evict anyone who can’t pay, and to support council workers who refuse to issue eviction notices.”

And some 50 people came to a protest in Wolverhampton.

Around Britain more protests have been called throughout the month of April.

Thanks to everyone who sent reports and pictures
Topics Bedroom Tax, Tories 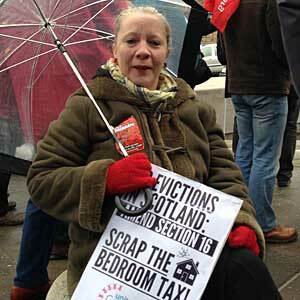 Millionaire Tories take benefits from millions: How Dare They!