This article is over 15 years, 4 months old
Over 600 people crowded into a room in the centre of Glasgow on Sunday afternoon for the launch of Solidarity, a new movement for socialism in Scotland.
Downloading PDF. Please wait...
Saturday 02 September 2006

Over 600 people crowded into a room in the centre of Glasgow on Sunday afternoon for the launch of Solidarity, a new movement for socialism in Scotland.

The meeting, called by Members of Scottish Parliament Tommy Sheridan and Rosemary Byrne, attracted a large number of former members of the Scottish Socialist Party (SSP) as well as many activists from the Stop the War movement and other campaigns who had not been members of the SSP. People travelled to the meeting from all over Scotland. Supporters organised coaches from several areas including the north east of Scotland, Fife and the Lothians.

The meeting was addressed by a wide range of speakers including anti-war activists, trade unionists and former SSP organisers.

Jim Walls, the T&G union convenor for opencast miners across Scotland told the meeting that he had brought with him 100 completed membership forms from miners and their families.

Billy Coates, a firefighter from Paisley said “our taxes should be spent on health, education and services not on nuclear weapons and illegal wars.”

Osama Saeed from the Muslim Association of Britain spoke to the meeting about the attacks on civil liberties and the growing racism faced by Muslims in Britain. He talked about the positive experiences that Muslims in England have had working with socialists in the Stop the War movement and Respect, and said that he hoped that we would see more of this in Scotland.

Angela McCormick, stop the war activist and former SSP council candidate, urged people to get to the demonstration outside the Labour conference in Manchester on 23 September. She pointed out that many people feel bitterly betrayed by New Labour and that they should have a home in a new party in Scotland.

The meeting voted to formally launch the organisation under the working title of “Solidarity – Scotland’s movement for socialism” and to hold a formal launch conference in November to make decisions about campaigning priorities and constitution.

For a full report see the next issue of Socialist Worker

For more info and to join Solidarity go to www.solidarityscotland.org 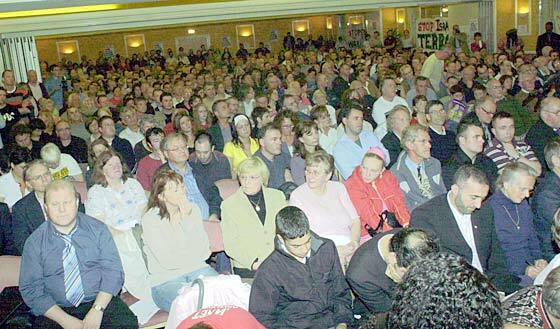 Photo of audience at launch of Solidarity in Scotland