This article is over 15 years, 5 months old
Tommy Sheridan, member of the Scottish parliament for the Scottish Socialist Party (SSP) and former convenor of the party, scored a fantastic victory last week when he won his defamation case against Rupert Murdoch’s News of the World.
By Esme Choonara
Downloading PDF. Please wait...
Saturday 12 August 2006 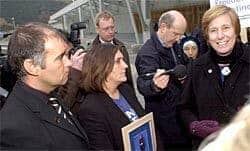 Tommy Sheridan, member of the Scottish parliament for the Scottish Socialist Party (SSP) and former convenor of the party, scored a fantastic victory last week when he won his defamation case against Rupert Murdoch’s News of the World.

Tommy took the paper to court over allegations that they printed about his private life. The tabloid was ordered to pay him the maximum damages of £200,000.

It may appeal the decision.

Tommy sacked his legal team part way through the trial and represented himself. He said that the jury’s decision proved that ordinary people could distinguish between “the muck and the truth”.

Tommy told Socialist Worker, “This is a tremendous victory for all those who rage against injustice and inequality.

“I was written off as a no-hoper by those with wealth and privilege but we overcame all the obstacles and put faith in working class people to differentiate between the muck and the truth.

“The lesson for all those taking on the bosses, campaigning against wars or just seeking improvements in their local communities is don’t give up – sometimes you can win even though the odds are stacked against you.

“Now I want to get back to fighting against poverty, inequality and illegal wars. I am hoping to attend Saturday’s demonstration in Edinburgh to stop the bombing of Lebanon.

“The overwhelming majority of the Scottish Socialist Party have backed me through thick and thin. However, the scab minority who lined up with the anti-union and anti-socialist News of the World to try to bolster their cause will remain political scabs for the rest of their lives. I cannot forgive them.”

There has been a groundswell of support for Tommy among members and supporters of the SSP.

Davie Henderson, an SSP national council delegate for Borders, branch said, “This is a fantastic victory for Tommy and for all of us. I felt like we have all been on trial over the past few weeks – Tommy Sheridan was representing all of us.

“For him to come through all this and win against News of the World is brilliant.

“I have never doubted Tommy because I know his track record. I have been involved in socialist politics for over 20 years and he has always been there.

“He stood by his principles – even going to prison during his campaign against the poll tax. I was there on the day he was released.

“For 18 months now it has been really difficult in the SSP. Tommy’s victory has been a massive confidence boost for the majority of party members who supported Tommy and who are involved in day to day campaigning.”

Many SSP members have been shocked to see leading party members testifying in support of News of the World.

Anne MacLeod, an SSP member in Inverness, said, “I am delighted at Tommy Sheridan’s victory. It is a victory for socialists and trade unionists everywhere. But I have been astounded by the faction in the SSP who have tried to use this case to undermine him and pursue their own agenda.

“The ordinary members of the SSP must now take their party back. Then we can go forward to build the mass party we planned, and put fighting poverty, inequality and injustice at the top of the political agenda in Scotland.”

Morag Robertson, from Edinburgh Central branch, told Socialist Worker that she joined the SSP a few years ago after hearing Tommy speaking at a public meeting.

She said, “He’s very good at explaining socialism in a way that makes you feel that you have to do something.

“I didn’t support his court case at first because it looked like a high risk strategy, but once the case had started I had to show solidarity. When a socialist is involved in a battle against a major corporation you don’t hand him over and say, ‘Well, we didn’t like him anyway.’

“I’m absolutely delighted that he’s won. What socialist wouldn’t be? It is an amazing achievement to beat the Murdoch empire.

“I think that there’s great potential for us to build on this victory and to introduce our ideas to the wider population of Scotland.”

The SSP has brought its national conference forward to October. Norma Anderson, joint secretary of Moray branch in the north east of Scotland, said, “One of the really good things to come out of this is that the people who really want to fight for socialism are all now fighting together.

“The way the party has been run by these people [hostile to Tommy Sheridan] over the past 18 months is not the party I joined. These people should resign or we need to stand people against them and freeze them out of the party.

“I’d like to see the party run by the rank and file.”

Charlotte Ahmed, an activist in Glasgow and a former member of the SSP executive, said that she was delighted to see Tommy strike a blow against News of the World.

She added that this is a chance to turn the party outwards: “At the SSP party conference earlier this year, it was clear that the majority of party members wanted to campaign with wider forces against war, against fascism, against climate change, for decent pensions and workers’ rights.

“This same majority has supported Tommy all along and is now celebrating a victory for our side against News of the World.

“I have been dismayed to see a small section of the party testify in court for News of the World. These are the people who don’t want to work with wider forces outside the party. They have caused huge damage to the party and I think that they should resign.

“Alongside supporting Tommy in his court case, many of us have been busy organising against Israel’s war on Lebanon. We are building for a Scotland wide demonstration in Edinburgh on Saturday and beyond to the demonstration in Manchester in September.” 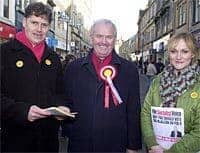 An overture to ballot for all-out strike