Tony Blair’s on another planet

Tony Blair’s on another planet

TONY BLAIR is on a mission to be the world’s most prominent advocate of neo-liberal free market policies.

He seems oblivious to the depth of feeling against his agenda for privatisation. This week the GMB union stepped up its campaign in defence of public services. It may organise local referendums to challenge Blair’s claimed mandate massively to increase private sector involvement in services like the NHS.

John Edmonds, GMB general secretary, said, “We are facing local elections next year, and if we ask Labour candidates to stand on a platform of privatising the NHS the result will be disastrous. We have to find a way of demonstrating to ministers the depth of grassroots opposition to public service privatisation.”

Amazingly a Downing Street source told the Guardian that “by such an aggressive stance the GMB may end up isolating itself politically from other unions”.

It is as if Tony Blair and his Downing Street advisers live on a different planet to the rest of us.

Whatever the issue-support for Son of Star Wars, scapegoating refugees, bowing to big business over food safety, handing hospitals over to fat cats-Blair has set himself on a course for confrontation with millions of people.

We need to bring these people together to give Blair and his cohorts a shock on 30 September outside the Labour conference in Brighton.

It has been jointly called by the Green Party, the anti-capitalist group Globalise Resistance, and the Socialist Alliance.

In every area building for the demonstration can bring campaigners together. In Milton Keynes trade unionists and members of the Socialist Alliance have set up a united campaign against privatisation.

The group has called a demonstration and rally against privatisation on Saturday 15 September.

The group is also arranging coaches to the Brighton demonstration.

In Portsmouth an anti-privatisation rally has been organised with former Labour Party NEC member Liz Davies.

Similar events would get widespread local backing in every area.

The day before the Brighton demonstration Globalise Resistance has organised a counter-conference in London on the theme “Another world is possible”.

On 30 September people are gathering in Brighton at 12 noon for protests, street theatre and speeches.

A free speech tent is being organised to contrast with New Labour’s attempts to stifle genuine debate at its conference.

Everyone is then coming together at 2pm to stage a mass protest outside the conference and send the loudest possible message to Tony Blair.

They’re scared of this

THE anti-capitalist movement can claim another victory. This time it is in Washington DC in the United States.

The World Bank and International Monetary Fund have decided drastically to shorten their meeting in the city at the end of September because of planned mass protests.

They have axed five days of the summit and corporate dining.

The police still plan a massive operation against the demonstrators, however, which includes fencing off whole swathes of the city. Already the police have requested $2.6 million just for bus and van rentals.

Another $1.9 million is to be spent on outfitting the police with special suits and helmets, and the police claim a further $1.3 million is needed for items like rubber bullets.

But protesters will not be deterred. Many actions are planned, including surrounding the White House on 29 September and a massive rally the following day.

As the news came through about Washington, there was also a big revival of the movement around Ralph Nader.

Nader rocked the US political landscape last year by running for president on the most left wing programme of any serious candidate in over 50 years. He mercilessly attacked corporate power and took the new anti-capitalist movement into the electoral arena.

After the election, though, there was no organised force capable of transforming the network which Nader had built into a movement that could continue the fight against corporate power.

Now Nader has re-emerged and set out on a drive to build such a movement. Last Friday a sellout crowd of almost 3,000 young people filled the Congress Theatre in Chicago, paying $10 or more to see Nader. Hundreds of local activists filled the entrance lobby of the theatre with stalls plugging many issues.

The rally was organised to coincide with the founding convention of the Campus Greens, the youth wing of the Green Party, where 500 students from 150 campuses all over the US had gathered.

Nader called on the Campus Greens to build 2,000 chapters by June 2002. A week earlier in Portland, Oregon, 7,500 turned out for the opening rally of a movement which Nader calls Democracy Rising.

The whole emphasis of these rallies is on building a genuine grassroots activist movement.

So the Portland rally included workshops and teach-ins organised by local activists before the rally.

After three days of organising workshops and walking the picket lines at local union disputes, the 300 students heard an inspiring speech from Leo Gerard, president of the United Steelworkers of America.

He told them, “I’ve come in the last six or eight months to believe fundamentally that we have, collectively, the chance to overthrow the global economic system that people are trying to design around us.”

by PETE MOORE in Chicago

TWENTY FIVE year old Swede Jonathan Pye has become the latest victim of the repression meted out to anti-capitalist protesters following the June demonstration at the European Union summit in Gothenburg.

Jonathan was sentenced to a shocking four years in jail after being convicted of violent rioting.

In all, 21 protesters have now received harsh jail sentences.

All have been jailed under Sweden’s legal system, which places justice in the hands of people put forward by establishment political parties.

Those nominated-like, say, magistrates in Britain-are likely to reflect the views of the very people the Gothenburg demonstrations were against.

Among those jailed are Luigino “Gigi” Longo, a 43 year old trade unionist and socialist living in Norway.

Gigi has a heart condition. He was on a bus being interviewed by Norwegian TV at the time Sweden’s police claimed they had video footage of him on one of the Gothenburg protests!

The Norwegian print workers’ union, which sent a delegation to the Gothenburg protests, is among those who have thrown their weight behind the campaign to free Gigi and the other protesters.

Paul Robinson, a UNISON union member from Britain, was jailed for a year. Paul’s union branch at University College London (UCL) is heading up a defence campaign.

Tom Silverlock of UCL UNISON says, “Paul did nothing except demonstrate against the effects of globalisation. He has been framed in a political trial.”

Some 112 complaints have been officially filed against the Gothenburg police by demonstrators. Yet not a single one has been dealt with yet. 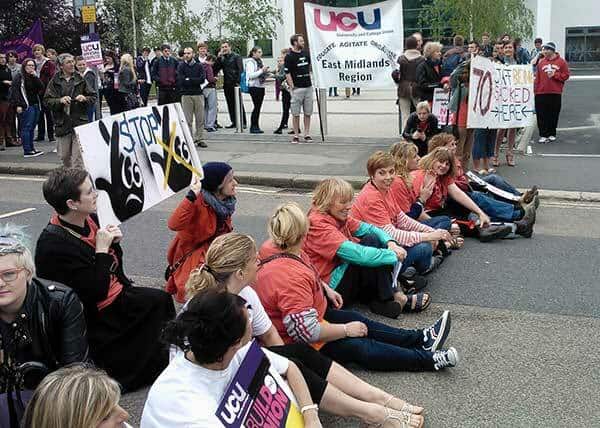 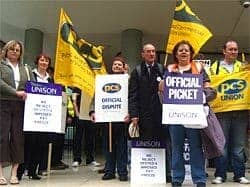