Top up the resistance to Blair’s student fees

This article is over 17 years, 11 months old
\"WE ARE now at the beginning of a journey which will replace the concept of a public service with a free market in higher education, a journey towards the Americanisation of English higher education.
Downloading PDF. Please wait...
Saturday 17 January 2004

“The government believes that there are too many higher education institutions, that many of them are badly managed, inefficient and uncompetitive. Rather than face the political fallout which would come from direct intervention, it prefers to use market forces.”

So said Malcolm McVicar, vice chancellor at the University of Central Lancashire. New Labour’s shameless adoration of the free market lies at the centre of their plans for universities in England and Wales.

The government’s Higher Education Funding Bill was finally published last week. There were minimal concessions to try to win over the rebel Labour backbenchers who say that they will vote against the bill.

A minority of the poorest students will get small means-tested handouts. But there is no change to the central policy, the introduction of university top-up fees of up to £3,000 a year by 2006.

And both Tony Blair and his education secretary, Charles Clarke, have made it absolutely clear that they will not back down from “variability”. This means different universities will set different prices for their courses. Less profitable institutions would be driven out of business or forced to merge with other universities.

A minority of universities, especially those making up the elite “Russell Group”, would stand to gain from the measures. The vice-chancellors who run these universities are queuing up to congratulate New Labour. They want to follow elite US universities like Harvard and Yale which charge students around £17,000 a year.

Less well-off students are herded into underfunded state universities. Michael Sterling runs Birmingham University and chairs the Russell Group. He has hints at what’s to come in Britain:

“It’s a step in the right direction. Variability is there and they’ve laid the foundation stones for how universities are going to develop. Nobody pretends that it’s enough.”

A protest that can rock New Labour MPs

THE NATIONAL Union of Students (NUS) has called on students to converge on parliament on 27 January.

This is the day the House of Commons is set to vote on the crucial Higher Education Funding Bill.

Tom Whittaker from the NUS executive told Socialist Worker, “This is a vitally important chance for as many students as possible to protest. Getting thousands of students outside parliament for the vote could have a big impact on wavering MPs. Already the protest is getting an enthusiastic response from colleges around the capital and beyond.

“Some of the big universities in London like Imperial College and the London School of Economics are planning to march on parliament to join the protest. These are the same universities that were at the centre of the demonstration against Bush.

“And it’s not just students who will want to protest. I’m sure there are lots of parents, teachers, lecturers and other trade unionists who understand what is at stake. Tuition fees are the sharp edge of what Blair is doing to services across the board. That’s why as many people as possible should be outside parliament. We filled Parliament Square for anti-war protests. Let’s try and create a similar protest to stop tuition fees.”

The protest assembles outside parliament at 12 noon on Tuesday 27 January. It will continue into the evening.

A convention, Saturday 7 February, central London Registration from 10am 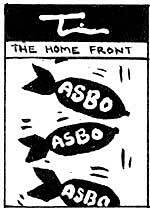 MPs slam arbitrary use of Asbos 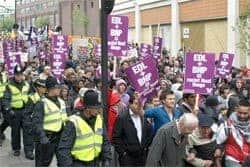