Tories’ Calais crime—fight to let the refugees in

In just one day they smashed up 100 of the shacks the refugees had built to shelter from the desperate conditions.

Afghan refugee Mohamed told Socialist Worker, “There are 50 or 60 police vans here. The police are forcing people to leave by terrifying them.”

Some people sat on their shelters to stop them being smashed. A few in desperation set them on fire. Others blocked the road in protest. Riot cops pushed them back

They bombarded crowds including small children with tear gas in revenge for refugees successfully smashing through the fence to defy the cruel blockade.

In Calais the eviction had been delayed for a court hearing last week. But officials turned up at refugees’ tents and shelters the next morning. Cops followed days later.

Officially the refugees are given two options. They can go to accommodation centres outside Calais—but only for a month.

Or they can cram into the shipping containers that make up the new prison-like official camp at Calais. To enter they must give their fingerprints—which can be used as an excuse to deny them asylum if they ever reach Britain.

In reality they have nowhere to go. 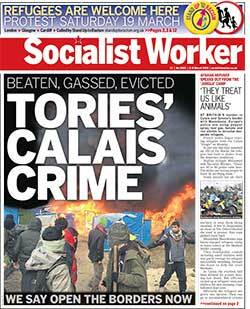 The French state is acting outrageously, as are those in the Balkans.

But Britain’s government bears full responsibility for the crime.

Through the European Union it is pressuring southern states to repress refugees before they can come here.

And without the Tories’ refusal to let refugees cross the border, the horrific camps at Calais and Dunkirk would not even exist.

“It means people are risking their lives to get across illegally.

“The money spent only swells the profit of the people traffickers.

“It would be cheaper, easier and simpler for everyone if people could apply for asylum and get across legally instead of putting lives in danger.”

Britain’s government also jails refugees in horrific detention centres such as Yarl’s Wood, where protesters are set to descend on Saturday 12 March.

Between the empty homes of rich investors and the cash blown on Trident nuclear weapons there is room for all those at stuck in Calais and at Idomeni too.

Against this outrage we must all take to the streets on Saturday 19 March.

As Mohamed said, “We are humans, and we need to be treated like humans.” 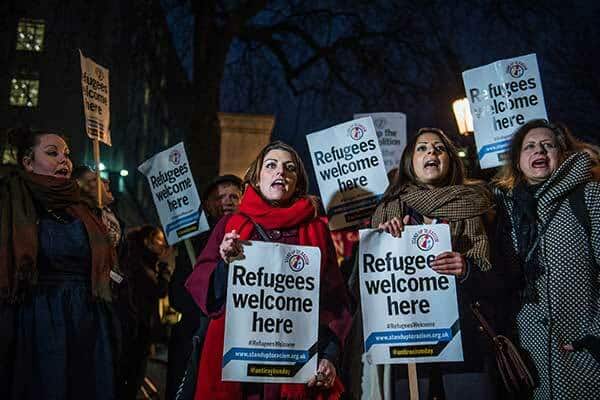 Go all out for 19 March anti-racist demos