Anger against the Tories’ Islamophobic “Prevent” strategy is growing in the face of a right wing witch hunt.

Up to 200 people joined a meeting against Islamophobia in Birmingham Central Mosque on Thursday of last week. Labour councillor Muhammad Afzal condemned David Cameron’s government as Islamophobic and criticised Prevent.

Stand Up to Racism in Newham, east London, launched a statement against Prevent in December that sent out ripples of resistance.

Tahir Talati, chair of Muslim charity Mend in Newham, was one of the signatories.

He told Socialist Worker, “We launched a local statement to try and get the council to talk to us.

“But it became popular—people in other places are organising around it.”

The right wing press is targeting key activists who signed it. The Daily Telegraph newspaper attacked the NUT teachers’ union for “colluding” with “Islamic extremists”.

The Sun newspaper joined the racist bandwagon on Monday of this week. 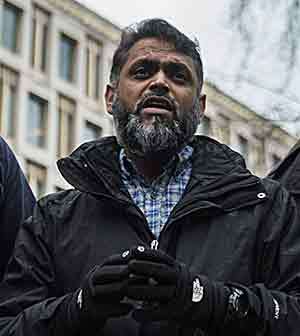 Moazzam Begg, a former Guantanamo Bay prisoner and director of detainee’ rights organisation Cage, told Socialist Worker, “The Telegraph is attacking someone for speaking out against Prevent because it is a right wing newspaper defending the government.

“Rob simply said what ordinary people, including some senior figures, think about Prevent.”

Tahir said, “It’s a pathetic and nasty attack on Rob. They seem to suggest it was some sort of collusion, but the letter was no secret.”

The statement had broad support, including from local imams, trade unionists and leading Green Party and NUS students’ union figures.

Anti-racists and those who believe in the right to speak out against government policy should defend Rob and all those witch hunted.

The NUT said, “The NUT makes no apology for raising legitimate concerns about the operation of and training for the Prevent strategy.”

A ten year old boy in Lancashire was pulled out of class on Tuesday of last week for misspelling “terraced house” as “terrorist house”.

The liberal Observer newspaper wrung its hands last Sunday arguing Prevent was “far from perfect” but that there is no alternative.

In fact the “imperfections” are the logical consequence of state-sponsored Islamophobia.

The Tories are ramping up Islamophobia to try and divide working class people.

Moazzam said, “They don’t recognise what causes ‘radicalisation’, but evidence shows that it’s British forces abroad, wars and Prevent itself is a self-fulfilling prophesy.

“All the attacks need to be responded to as the nonsense they are.”