Tory attacks grow – but so does resistance

This article is over 11 years, 6 months old
The jobs massacre is growing every day.
By Tom Walker
Downloading PDF. Please wait...
Tuesday 25 January 2011

The jobs massacre is growing every day.

Last week alone Nottinghamshire council announced it is cutting 2,500 jobs. Fife council said it will cut 1,800, Worcestershire and Croydon 1,500 each, and Surrey, Leicester and Southwark 1,000 each.

And that’s just the tip of the iceberg.

At the Heart of England NHS Trust some 1,600 jobs are to go—20 percent of the workforce.

More than 140,000 council jobs are now under threat according to the latest list from the GMB union. The total has risen by 15,000 in a week.

These cuts will destroy local services.

In the south London borough of Lambeth, for example, cuts announced this week will close libraries, advice centres, youth centres and much more.

One in four workers will lose their jobs.

But resistance is spreading as well—with some victories.

Campaigners in Bury have forced the council to back down over its threat to close Unsworth Library after 300 packed into a meeting over it.

In Brighton the council has retreated from closing a local nursery, Bright Start, thanks to a campaign led by the nursery’s Unison union branch.

Many workers facing cuts are in the Unison union. In Nottinghamshire county council some 3,600 workers in the union will begin a ballot for strikes this Wednesday.

Nottinghamshire Unison joint branch secretary Martin Sleath said that workers “are sick of hearing there is no alternative to these cuts”.

The council has £159 million in cash reserves.

The union has said it may call strikes on 24 February—the day the council will set the budget. Local unions will demonstrate on that date.

In Southampton, up to 1,000 council workers held a mass meeting and march against cuts on Thursday of last week.

The workers voted to call for a ballot before marching on the town hall. There was a militant contingent of striking Medirest cleaners from Southampton General Hospital.

In Hull on Thursday of last week some 400 people marched around the town hall, before crowding into the council chamber as it voted on cuts. They defied the mayor’s orders to stay silent, clapping and shouting for every anti-cuts speaker.

And in Carlisle hundreds of trade unionists protested against cuts last Saturday, including teachers, nurses and firefighters.

An anti-cuts march in Wigan last Saturday was boosted by a delegation of Heinz workers, who recently struck and won a better pay deal.

One baker even brought a tray of pies for the marchers.

More anti-cuts marches are planned, including this Saturday in Glasgow and Sheffield.

Tower Hamlets in east London saw 250 members of the Unison, GMB and NUT unions come together in a mass meeting.

They voted unanimously to begin joint ballots for industrial action. Unison will start a consultative ballot this week.

In Doncaster, South Yorkshire, a 50-strong meeting of Unison union reps unanimously voted to call for a strike ballot.

It will also begin a consultative ballot.

Workers are making it clear that they want to fight. Union leaders need to open the floodgates and start real strike ballots everywhere as soon as possible. 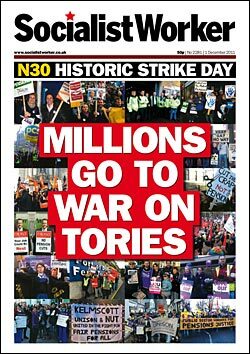