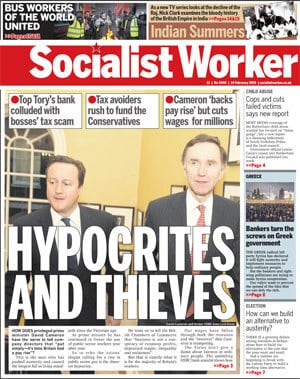 How does privileged prime minister David Cameron have the nerve to tell company directors that “put simply—it’s time had a pay rise”?

This is the man who has pushed austerity and caused the longest fall in living standards since the Victorian age.

As prime minster he has continued to freeze the pay of public sector workers year after year.

So to echo the unions’ slogan calling for a rise in public sector pay is the sheerest hypocrisy.

He went on to tell the British Chambers of Commerce that “business is not a conspiracy of runaway profits, depressed wages, inequality and unfairness”.

But that is exactly what it is for the majority of ’s workers.

Our wages have fallen through both the recession and the “recovery” that Cameron is trumpeting.

The Tories don’t give a damn about fairness or ordinary people. The unfolding HSBC bank scandal shows how their mates wriggle out of paying tax, and get richer while everyone else has been tightening their belts.

The head of HSBC, Stephen Green, was appointed a trade minister by Cameron in 2010.

Tax officials across the world have known since 2010 that the bank colluded with hundreds of wealthy clients to conceal money in undeclared Swiss accounts.

The Guardian newspaper reports that HSBC used “its branch to hand out bricks of cash in a variety of currencies from euros to pounds”.

The Tories’ millionaire backers were out to thank them for sticking by the rich at the secret “black and white party” on Monday. Tory supporters paid up to £15,000 a table to join David Cameron for a luxury fundraising dinner at a posh hotel.

Guests bid for special treats. One paid £210,000 for a statue of Margaret Thatcher.

But it’s hard to believe that even the most enthusiastic Tory would bid for dinner with former education secretary Michael Gove at his house, or an “iron man” endurance course with Iain Duncan Smith.

Put simply, it’s time to get rid of the Tories. 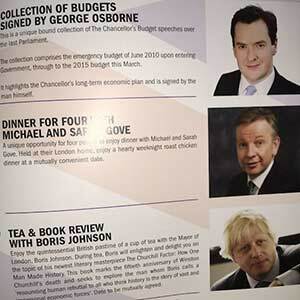