This article is over 10 years, 4 months old
The number of people who are working age and jobless in Britain has soared by nearly 100,000 since David Cameron came to office.
Downloading PDF. Please wait...
Tuesday 23 August 2011

The number of people who are working age and jobless in Britain has soared by nearly 100,000 since David Cameron came to office.

New unemployment statistics show that nearly 2.5 million people are out of work. And it’s a direct result of government cuts.

Some 37,000 more people began to claim unemployment benefits in July, a 5,700 increase from June—double the rise economists expected. That means that the unemployment rate has risen to 7.9 percent in the three months to June.

Even some of those defined as “employed” are suffering. Nearly 1.3 million people now work part-time because they can’t find a full-time job. This is a rise of 83,000 in the three months up to June.

Some, like the Daily Mail newspaper, rushed to blame “migrant” workers. But as Socialist Worker has explained before, the Daily Mail misrepresents the statistics (see http://bit.ly/pbL2Wu).

In reality it is Tory cuts that are pushing unemployment up. For example, the number of women sacked has soared by more than

40 percent over the past year.

Over one million women are out of work. Women make up two thirds of workers in the public sector—which is set to suffer huge government job cuts.

Nearly one million 16-24 year olds are unemployed—more than one in five. And, worryingly, around 50,000 pensioners have returned to work, presumably unable to get by on their meagre pensions.

The Tories like to imply that anyone without a job isn’t trying hard enough. But an average of 5.4 people are chasing every job.

Chancellor George Osborne’s flippant response to the figures was that they were “not entirely unexpected”.

No wonder he expects things to get worse—the Tory cuts have barely started to bite.

The Office for National Statistics (ONS) predicted that the gross domestic product for the second quarter of 2011 could reach the dizzy heights of 0.3 percent.

That’s slightly higher than its previous estimate of 0.2 percent.

But four hours later it said it had made an “arithmetical error”—and the figure should be recalculated.

Whatever the figure, it’s clear that the economic crisis isn’t over. 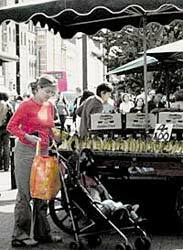