This article is over 11 years, 3 months old
George Osborne’s vicious spending review this week saw the Tories’ launching class war on workers and the poor. Socialist Worker looks at where he wants the axe to fall
Downloading PDF. Please wait...
Thursday 21 October 2010

£7 billion a year was cut from welfare spending—and that’s on top of cuts already announced in June’s budget.

The total welfare spending axed is now an incredible £72 billion over four years.

Sick and disabled people will bear the brunt of these cuts.

A 12-month time limit on the Employment Support Allowance (formerly Incapacity Benefit) will see a million people lose it.

Up to £2,500 a year is being taken away from 58,000 Disability Living Allowance claimants who live in care homes.

Complex changes to Tax Credits will see many people lose them entirely.

Parents will now have to work at least 24 hours a week, up from 16, to qualify for any Working Tax Credits—yet the childcare costs that can be covered are being cut by 10 percent.

Meanwhile, Osborne launched yet another “clampdown” on benefit fraud—in other words, harassing people who are trying to live on £10 a day while ignoring the rich’s tax swindles.

The Tories like talking about cutting waste and inefficiencies. But in reality that means huge job cuts. George Osborne said some half a million public sector jobs are to be axed as a result of the spending review.

According to the Unison union, those 500,000 public sector job cuts will be a “false economy”—and will end up costing a further 425,000 jobs in the private sector.

That could cost the Treasury around £4.6 billion in lost tax revenue and £6.1 billion in increased benefits payments—adding £10.7 million to that deficit the Tories say they care so much about.

At the election they promised £3 billion in efficiency savings in government departments.

Osborne just doubled this to £6 billion.

That means hundreds of thousands more job losses, even on top of the half a million that they’re willing to admit to.

A third slashed off local funding

Local council spending will be reduced by 33 percent over four years—that’s a third slashed from the services and jobs that councils currently provide.

Moves to end most “ringfencing” of spending mean councils won’t be told what to spend their money on. It is a ploy by the government to get local politicians to take the brunt of the anger as services are destroyed.

For example, a key area currently ringfenced is children’s services. Cuts of a third would be devastating.

It’s also clear that the cuts will lead to a major drive by right wing councils to extend privatisation and outsourcing into every area.

It plans to turn itself into a “virtual council”, outsourcing almost every service to private companies who put their profit above people’s needs.

Work longer for a lower pension

The age you can retire on a state pension will rise to 66 more quickly than previously announced. The increase will now take effect from 2020, not 2024, for men and women.

And, all men currently under the age of 40 will have to wait until they’re 68 to retire.

Osborne also announced that pensions contributions by public sector workers will increase by a total of £1.8 billion by 2012.

This will mean most public sector workers will be forced to pay around £450 a year more in contributions by 2014/15—effectively a further pay cut.

This comes on top of a two or even three-year pay freeze for the vast majority of public sector workers.

Osborne also announced a review of the “Fair Pay Deal” reached with unions where workers’ jobs have been outsourced to the private sector.

This could see those workers’ pensions plummet.

Funding for social housing will be cut by £4 billion—slashing the existing budget by 60 percent.

The government says it aims to build just 37,500 new homes a year. This will destroy the hopes of the millions of people on waiting lists for decent, affordable housing.

And those who do get council or housing association accomodation in the future will be squeezed hard as they face higher rents—up to 80 percent of private rents.

The National Housing Federation says that the average rent for a three-bedroom social home is currently £85 a week.

This comes on top of a major reduction in housing benefit and the threat to end secure council tenancies.

The total benefits any family will be able to receive will be £500 a week—leaving many who have long lived in areas like central London struggling to pay their rent.

Meanwhile the Supporting People budget—which helps over 122,000 vulnerable people to live independently—is to be cut by 11.5 percent.

Osborne claims that the NHS and schools have been protected from cuts. But he is lying.

True, health spending will rise by 0.1 percent above inflation—but health analysts say the NHS needs at least 6 percent a year just to stand still. This is because of the aging population and increasing price of new treatments.

The health service is already facing cuts as the Tories demand £20 billion “efficiency savings” by 2014, and the abolition of local Primary Care Trusts.

The Royal College of Nursing says some 10,000 posts have been axed in recent months.

In schools, 40,000 teachers will go in England as a result of the cuts, the government’s own education department says in a leaked report.

Osborne has cut the education budget by more than 3 percent once inflation is taken into account.

He abolished the Education Maintenance Allowance (EMA), currently paid to 600,000 poor 16-19 year olds to help them stay in education.

And his 70 percent cut in the youth budget means youth clubs and after-school activities will all but disappear.

The Tories cut the universities budget by 40 percent and the colleges budget by 25 percent.

This will mean fewer places for students, fewer lecturers, and even whole courses and colleges closing down.

On top of this, Osborne threw in the scrapping of English for Speakers of Other Languages (Esol) provision by 2012.

No fairness on transport fares

The spending review brought more bad news for anyone who uses public transport.

The government is planning to change the way that train fares are regulated, while cutting back on company subsidies.

At present fare increases are capped at the RPI rate of inflation plus 1 percent.

This is set to rise to RPI plus 3 percent. RPI was 4.8 percent in July.

Also, bus subsidies are to be slashed by 20 percent, so firms will look to protect their profits by pushing up fares and attacking workers’ pay and conditions.

Did the queen take a hit too?

The news that the queen was to have a 14 percent real terms cut in spending has been used as proof that “we’re all in it together”.

Osborne said in his speech that, “Her Majesty graciously agreed to a one-year cash freeze in the Civil List for next year.”

But don’t expect to see the queen down at Lidl shopping for bargains.

She is worth an astonishing £349 million, not including her palaces and crown jewels.

And a new deal means that she gets a share of the £210 million profits from government estates relinquished by George III in 1760.

The Tories’ sheer nastiness was shown by their plans to make any single person under the age of 35 share accomodation or lose their benefits.

So the poor are to be forced to live together in sub-standard homes with people they don’t know and possibly in an area they don’t want to live in. And George Osborne claims that that’s “fair”? 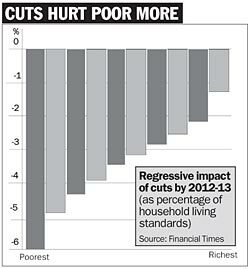 Spending Review cuts hit the poor and help the rich

Download SW analysis of spending cuts as a leaflet 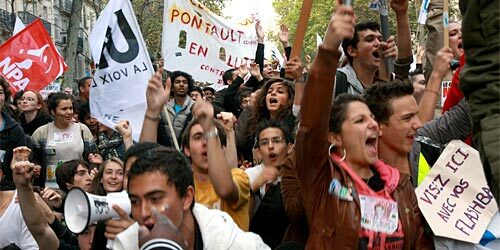 How we can stop the cuts