Tottenham trial asks: ‘Where was the gun?’

This article is over 9 years, 10 months old
The trial of a man accused of supplying a gun to Mark Duggan is underway. Kevin Hutchinson-Foster is standing trial at Snaresbrook Crown Court.
Downloading PDF. Please wait...
Tuesday 25 September 2012

The trial of a man accused of supplying a gun to Mark Duggan is underway. Kevin Hutchinson-Foster is standing trial at Snaresbrook Crown Court.

The police intercepted Mark Duggan as he travelled in a taxi in Tottenham on 4 August last year, and shot him dead. Riots broke out across London and parts of England in response.

A firearms officer known as W70 told the court that Mark “very quickly drew out his right hand from the left hand side of his waistband and he was holding a self-loading pistol or handgun” as he left the taxi he was travelling in.

After Mark was shot W70 said he shouted, “Where’s the gun?” but failed to find one. Stuart Denney for the defence asked him, “Where was the gun?” W70 replied, “I have no idea.” W70 had not written in his initial statement that Mark Duggan was armed.

Another officer told the court that when he arrived at the scene, officer R31 pointed out a gun to him. This was lying on a grass verge wrapped in a black sock. The police officer described how he was given the role of “guarding” the gun.

A third officer agreed that he collaborated with other officers to “refresh” his memory while making a statement. And he agreed that all three PCs at the scene went over events together as they made their statements together. The trial continues. 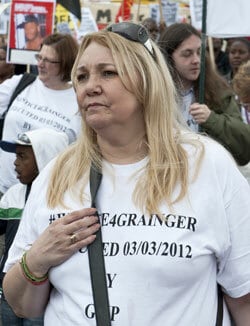