This article is over 11 years, 7 months old
"Our fight matters because if this can happen to us, with the strength our union has, it can happen to any worker."
By Tom Walker
Downloading PDF. Please wait...
Tuesday 08 June 2010

That was the message from cabin crew worker and Bassa union rep Laura to a solidarity meeting held in Camden, London, on Tuesday of last week.

Laura—not her real name—told the meeting that the strikes “feel like the beginning of a protracted dispute”.

“They talk about our wages a lot. And yes, we do earn more than workers at Ryanair and Easyjet. But we make no apology for that.

“It is because we have a strong union and have fought for our wages and conditions.

“We’re not interested in a race to the bottom.

“I don’t hear Willie Walsh saying ‘who is the lowest paid CEO? I must pay myself the same as them.’

“This is about cutting cabin crew. Management decided, without negotiation, that they were just going to do it. One day we got our rosters and one crew member had disappeared.

“The elephant in the room is the ‘new fleet’—new workers with worse conditions.

“BA cabin crew are highly unionised—91 or 92 percent are in the union. But there has been a concerted attempt to harass us, using threats over staff travel.

“Staff travel is very important to cabin crew. Lots of crew commute to work. They’ve used taking it away as a punishment for those who strike.”

“You wouldn’t believe how touched cabin crew are by moments like this,” Laura said. “Thank you for the chance to speak and for your solidarity.”

Laura was joined on the platform by RMT regional organiser Steve Hedley, local activist Candy Udwin, and the meeting was chaired by George Binette of Camden trades council.

It was backed by the Right to Work campaign and the leader of the Labour group on Camden council.

Workers from local branches of the Unite, RMT, PCS, CWU and Unison unions spoke from the floor to offer their solidarity with BA strikers.

We need more meetings like this. Such shows of solidarity give a boost to BA cabin crew and help build real support for the workers.

Email [email protected] to invite a speaker to your meeting, or to send messages of support 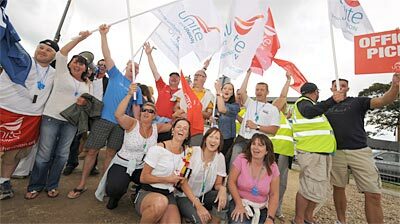 Keep up the battle to beat British Airways bosses 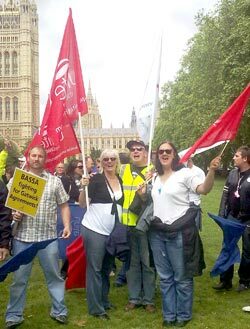