TUBE WORKERS defied the anti-union laws and struck a blow against privatisation last week. Their second strike brought London Underground to a halt. Management admitted that not a single tube train ran the length of the line.

The 8,000 members of the RMT union on the tube struck officially. Drivers in the ASLEF union remembered the solidarity they had got on their own official strike in February and refused to cross RMT picket lines. “There was tremendous support from the public,” said a picket at Brixton station. “People broke step to come over and tell us we were doing the right thing.”

Pickets at other stations and Socialist Alliance campaigners who had gone to offer support all reported a similar response. This was the real story of the strike, not the article in the right wing London Evening Standard which claimed commuters wanted to string up strikers. People hate New Labour’s crazy tube privatisation plan. They want a clear alternative that will improve transport in the capital.

London mayor Ken Livingstone is threatening court action against New Labour’s scheme, but he still wants talks with the government. His transport commissioner, Bob Kiley, says he is against the fragmentation of the tube under privatisation, but he attacked last week’s strike. ASLEF leaders have accepted a rotten compromise which will not guarantee safety and jobs. 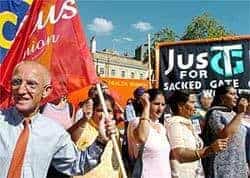 Unions struggling together against a bosses’ Britain