TONY BLAIR was quick to accuse the protesters at Gothenburg of failing to understand that the growth of world trade benefits the poor. The same claim has been made repeatedly by the international development secretary, Clare Short.

She attacked the demonstrators against the World Trade Organisation (WTO) in Seattle as enemies of the world’s poor. But last week the WTO in Geneva debated an issue that proves Blair and Short wrong.

The rationale was that companies have no incentive to invest in research unless they have legally enforceable property rights in the discoveries that they make. This argument is dubious in itself. Albert Einstein may have been working in the patents office at Berne when he developed the special theory of relativity. But he made sure his ideas became part of the public domain, of the common property of the international scientific community.

The idea of intellectual property rights becomes especially obnoxious when it is projected onto a world scale. Scientific research is dominated by the universities and the multinational corporations of the advanced capitalist countries. The universal enforcement of patents allows the rich to entrench their dominance and deny the poor access to the fruits of scientific research. Even some neo-liberals are dubious about TRIPS. Financial Times columnist Martin Wolf, normally a fierce defender of free trade, writes:

“Strengthening intellectual property rights limits the ability of less advanced countries to start new industries by copying the products and processes of the leaders. More important, it raises the prices of the goods their people consume. For many of the world’s poorer countries, these losses will outweigh putative gains.”

This is particularly clear in the case of medicines, whose development is dominated by a handful of huge pharmaceutical companies. One third of the world’s population lacks access to basic medicines. The poverty of the Third World limits its market power and therefore makes it of little interest to the pharmaceutical giants.

Yet the big drugs companies still want to protect their collective monopoly even if, for example, that means denying Africa desperately needed AIDS drugs. TRIPS is one of their tools. Most developing countries were required to introduce patents legislation by the beginning of 2000. In fact, the accord contains some important loopholes. Governments have the power to override patents by issuing compulsory licences for drugs or allowing parallel imports-imports of cheaper versions of a patented drug. They are supposed to be able to do so in the public interest, for non-commercial use, and when patent rights are abused by the holder.

This didn’t stop the United States threatening trade sanctions against South Africa and Thailand, among others. According to the Financial Times: “Health groups say the US is still exerting pressure, for instance in negotiations on the Free Trade Agreement of the Americas, on countries to forego or weaken TRIPS safeguards. The big pharmaceutical companies have threatened to withdraw investment from Brazil and other countries if they use compulsory licensing. The US has also filed a WTO complaint against provisions in Brazil’s patent law requiring local production of a patented product within three years.” The WTO’s African members called for a debate on these issues back in April, saying that TRIPS faced a “crisis of legitimacy”. But discussion isn’t enough.

During the past few years the WTO and other leading international financial institutions like the International Monetary Fund and World Bank have responded to their critics by offering them “dialogue” while continuing to force through neo-liberal policies.

The only way to get these institutions and their allies in the multinational corporations to shift is through the pressure of mass protest. That’s what forced 39 pharmaceutical companies to drop their challenge to South African legislation designed to give wide access to cheap drugs. It looks as if after that defeat the drugs companies have regrouped and are continuing their offensive. Campaigners are going to have to be ready to mount more mass action. 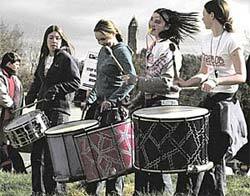 Raven Manufacturing engineers: 'Yachts for bosses, poverty pay for us'