Tube cleaners’ striking back for a living wage

This article is over 13 years, 5 months old
Tube cleaners are set to step up their fight for fair pay with a 48-hour strike from Thursday of this week.
Downloading PDF. Please wait...
Tuesday 19 August 2008

Tube cleaners are set to step up their fight for fair pay with a 48-hour strike from 5.30am on Thursday of this week.

They have already struck for 72 hours in their battle for a London living wage and other benefits from their employers – the ISS, ICS, Initial and GBM contractors.

The employers have suspended a number of workers after alleging that their national insurance numbers were wrong.

RMT transport union members lobbied a meeting between the union and the bosses at the Acas conciliation service on Monday of this week.

Union reps have been campaigning and organising for the action in the run-up to the strike.

They are winning wide support from the trade union movement for their fight for fair treatment at work for the mainly migrant workers. The workers are on around £5.50 an hour.

Clara Osagiede, secretary of the RMT cleaners’ grade, told Socialist Worker, “We will not accept anything less than the London living wage of £7.45 an hour. I went to the Neasden depot last week to speak to cleaners who work for the ISS company.

“Eleven workers clean 31 trains and they are reducing their number to seven. They also have to go to Stanmore to clean ten trains.

“The work they are doing is increasing, but the pay and the number of workers is not.

“The employers are putting workers through a stressful situation and then they complain when they phone in sick.”

Phillip Mambuliya, chair of the RMT cleaners’ grade, said, “The employers have put people under pressure, leading to the cleaners’ morale being very low.

“Instead of taking our worries into consideration they have suspended workers.

“It seems they think that their BMWs and lifestyles should come at the expense of the cleaners.

“The union has started a hardship fund to help the cleaners, who are very low paid, to get through this struggle.”

Every trade unionist and campaigner should back the cleaners’ fight for justice. 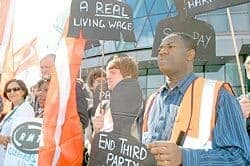 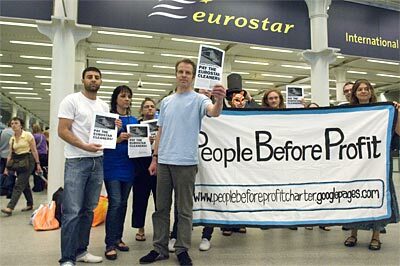 Back the Eurostar cleaners in crucial pay battle