Tube strike has a major impact

This article is over 13 years, 1 months old
The first full day of a strike by thousands of members of the RMT transport union at London Underground and Transport for London had a big impact on tube services in the capital today.
Downloading PDF. Please wait...
Wednesday 10 June 2009

The first full day of a strike by thousands of members of the RMT transport union at London Underground and Transport for London had a big impact on tube services in the capital today.

The workers are striking for 48-hours demanding decent pay and job security, an end to plans for thousands of job cuts, and an end to the harassment and bullying of workers.

There were solid picket lines at stations, depots and offices across London.

London mayor Boris Johnson and tube managers claimed that the strike was weak because they managed to keep some services running.

But RMT members struck solidly in support of their demands causing the suspension of much of the service. They are angry after managers scuppered a deal agreed with the union that would have met many of their demands. The RMT believes that Johnson had a role in wrecking the agreement, which would have seen the strike suspended.

The media has reported the major impact the strike has had.

Bosses were only able to keep some parts of the tube network running because leaders of the Aslef train drivers’ union said that the action was wrong and instructed their members to work as normal. Despite this, a number of Aslef members refused to cross picket lines.

RMT activists are appealing to other rank and file Aslef members to follow their example, respect the picket lines and join the fight.

The strike continues until 7pm on Thursday. 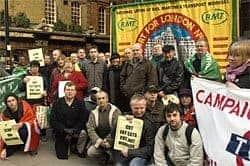 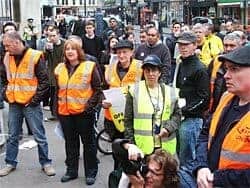 Strike for jobs, pay and justice hits the tube