London Underground (LU) workers protested to defend jobs, pensions and conditions at Tottenham Court Road on Tuesday morning. It coincided with the opening of Crossrail, branded the Elizabeth line, that will go through the central London Tube station.

RMT union members are gearing up for strikes on Monday, 6 June, as bosses plan to axe 600 station staff jobs. Station worker Mac told Socialist Worker the “mayor of London had a choice” to address the funding crisis—“take on the government or take down the staff”. “He’s chosen the latter,” he said. “Now we face a three pronged attack on jobs, our pensions and conditions.

“The 600 cuts are just full time workers. Part time staff—that LU managers admitted would be disproportionately affected—aren’t classed the same as full time staff. We could see around 750 roles removed.”

RMT members say they will not stand idly by  as “managed decline” takes place. They are right to say this is just a way to make workers pay for the Tories greed and the cost of the Covid pandemic.

Despite the scale of the bosses’ attack, Mac remains positive. “We have won in the past and we can win again,” he said. “If Transport for London (TfL) reach their goal with no resistance, other workers will be affected. Station staff are just the first in the firing line.” RMT member Chris agreed, adding, “During the cost of living rise workers need financial security.”

As TfL’s government funding runs out on 24 June LU wants to slash £500 million—with station staff cuts of £35 million. Station worker Sadie told Socialist Worker, “Passengers need assistance. Their ticket may not work, people with mobility issues need help and the visually impaired. People will get to the station and realise there’s no one to help them—it makes it less accessible and less safe.

“Fewer staff means others will have more work to do. We’d have to do longer shifts—we have to open and close the stations. These extreme shifts would have a huge impact on work life balance and our mental health.”

Sadie said it’s great that workers are taking action. But she added, “It should be more than just 24 hours. We struck for two days last time. We also missed a big opportunity to cause a fuss over the Jubilee weekend—we can’t keep missing those opportunities.” The 6 June must be a launch-pad for more hard-hitting strikes to defend jobs, pensions and conditions.

Workers at Euston and Green Park underground stations in central London will walk out Friday of next week against what they say is a bullying manager.

The RMT union members’ action will hit the closest station to Buckingham Palace during the queen’s Jubilee weekend celebrations. Workers say they have suffered years of intimidation, bullying and unjust sackings by a manager who has created a toxic atmosphere. Union members have been building support for the strike to ensure every worker walks out and joins the picket line. 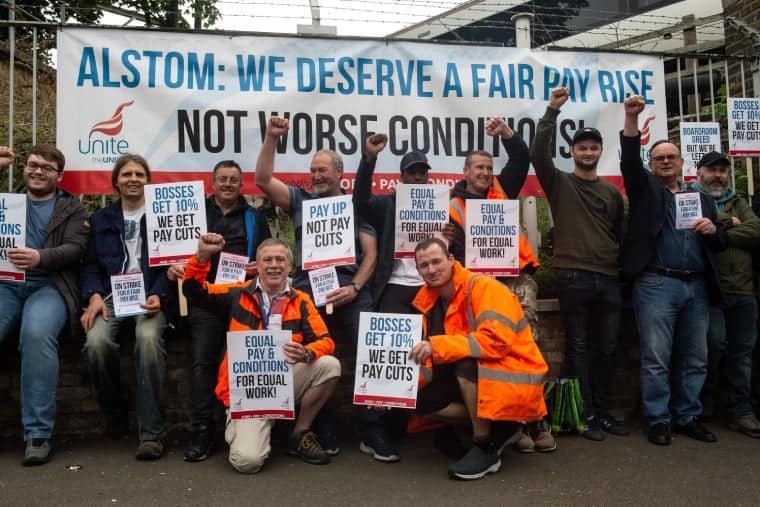 Engineering workers on the London to Southend C2C train line are striking over pay and conditions. The Unite union members, pictured in east London, walked out between Monday and Friday of last week and this Monday. They were set for further action on Friday and Monday of next week and Friday 3 June (Picture: Guy Smallman)

Train conductors employed by TransPennine Express in England are keeping up their fight over pay. Around 270 RMT union members have held a series of strikes since 13 February—and the wave of action will continue until 4 June, hitting the Jubilee weekend. They voted by 85 percent to strike for an end to the pay gap between them and workers at other companies.