This article is over 11 years, 10 months old
Some 300 delegates at the TUC came to the penultimate Labour Party leadership hustings on Monday night.
Downloading PDF. Please wait...
Tuesday 14 September 2010

Some 300 delegates at the TUC came to the penultimate Labour Party leadership hustings on Monday night.

All candidates were to the right of the tone of determination from delegates to resist the Tory attacks.

Each candidate was asked how the cuts could be fought, but no clarity emerged.

He was the only candidate who wouldn’t promise to attend the TUC/Unite rally against the cuts on the eve of the spending review—all he could offer was, “Let’s not get angry, let’s get organised.”

His brother, trade union bureaucracy favourite Ed Milliband, promised a break from New Labour, claiming he was “not the candidate of a New Labour establishment.”

But in stark contrast to the debate on the conference floor, he argued opposition to proposed spending cuts must be “responsible”.

Ed Balls continued his rather hollow tack left on everything but immigration.

He described himself as the “head and heart” candidate and said Labour had to show there was an alternative to “dangerous” cuts.

Andy Burnham has wanted to tack right but the TUC was not the place to do it. So he said Labour could not afford to show it was “in denial” about tackling the deficit, saying Labour had to make the “moral argument”.

Diane Abbott said Labour must “stand side by side” with the union movement against the cuts, which she said were “ideological not inevitable”.

That’s why Socialist Worker calls for a vote for her. 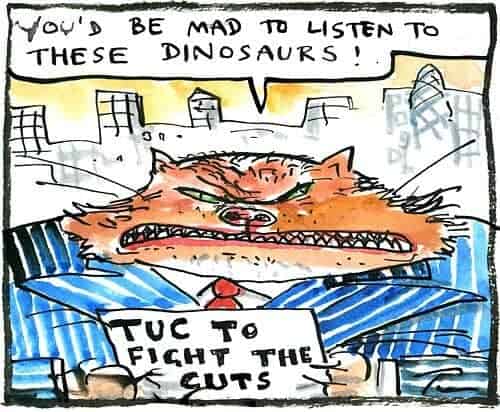 A sea change on fighting anti-union laws at the TUC

TUC calls for an end to blacklisting