Parliamentary candidates standing for the Trade Unionist and Socialist Coalition (TUSC) in May’s general election have been campaigning against austerity.

Courses to be cut include Level 1 Access courses, which are aimed at helping young people who leave school without key GCSEs. Teachers and learning support also staff face redundancy if the courses are cut.

Jon said, “These courses cannot be shut down. They are for students who come out of school with low GCSE passes and give them a second chance to go on to do other courses, develop their skills and improve their career opportunities.

“We live in a country where wealthy individuals, corporations and banks are dodging their taxes. There is more money that could be spent on education.”

Other TUSC candidates have been hitting the streets to build their campaigns.

Dave Gibson is the parliamentary candidate for Barnsley Central. He is a leading figure among the South Yorkshire Freedom Riders, who have been campaigning against council plans to take free travel passes from older and disabled people.

He told Socialist Worker, “I was on a Freedom Riders’ protest the other week – there are about nine people involved who said they would help in some way or other with the TUSC campaign.

“We’re also holding stalls to campaign around the 21 March demo using the new TUSC anti-racism poster. We’re meeting people and we’re getting lots of support from people that we’ve met in various campaigns.”

Edinburgh East candidate Ayesha Saleem has also been campaigning. She told Socialist Worker, “We’re going to have a big day of action in two weeks time with people coming over from to help out.

“We’ve been doing a petition on tax dodging on the stall which has a real echo with people.”

She added, “People are disgusted with mainstream politicians and say they really don’t know what’s like for working class people.

“This shows why it is right for us to stand and provide a real alternative to the mainstream parties all who are committed to scapegoating, islamophobia and neo-liberalism.” 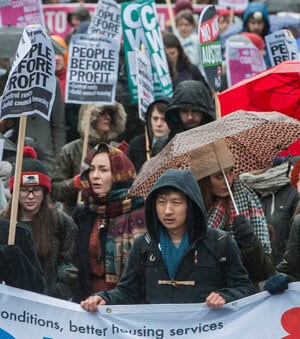 How can we take on austerity in the general election?