TUSC debates its next moves

This article is over 9 years, 9 months old
Around 100 people gathered in London last Saturday for the conference of the Trade Unionist and Socialist Coalition (TUSC).
Downloading PDF. Please wait...
Tuesday 25 September 2012

Around 100 people gathered in London last Saturday for the conference of the Trade Unionist and Socialist Coalition (TUSC).

TUSC was set up to contest seats in the 2010 general election. It has also stood in council seats and by-elections.

“All the main political parties in Britain advocate austerity,” said RMT union president Alex Gordon. “What workers are crying out for must be an alternative. We believe TUSC provides the nucleus of such a force.”

TUSC is a federal coalition. It currently includes the RMT alongside the Socialist Workers Party, Socialist Party and individual activists in the Independent Socialist Network (ISN).

Alex called on activists to make sure the RMT was not the only union supporting TUSC. “The RMT will not stick around forever and a day,” he told them. “Unless other comrades step up to the plate, this ship ain’t gonna sail.”

Socialist Workers Party national secretary Charlie Kimber agreed. “It’s easy to identify the gap to the left of Labour,” he said. “It’s harder to fill it.”

Some independents argued that TUSC should go further in setting up a “new party” now with individual membership.

Dave Church is a member of the Democratic Labour Party in Walsall, a group expelled from Labour in 1995. “We are desperate to be part of a national party,” he said. “We need to move quicker.”

Pete McLaren for the ISN said he shared the frustration “but we can’t pretend we’re something we’re not”.

The majority of TUSC, including Socialist Worker supporters, agreed that for now it should remain a federal organisation.

TUSC is planning to stand in the Manchester Central by-election and the election for mayor of Bristol in November. 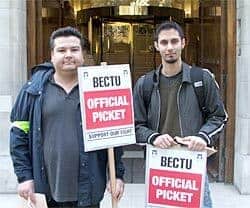 Terrorism and murder by Israel

After Camberwell fire: Why did council say another tower block was safe?