This article is over 7 years, 0 months old
By Nick Clark
Downloading PDF. Please wait...
Tuesday 05 May 2015

Trade Unionist and Socialist Coalition (TUSC) parliamentary candidates have stood in seats across the country for Thursday’s general election.

They have used their election campaigns to strengthen the resistance to racism and austerity after the election.

In Tottenham, north London, candidate Jenny Sutton held a final rally for her supporters on Wednesday of last week.

She talked about the important task of building an alternative to austerity.

“The Tories and the Lib Dems and the Labour Party all say that there is no alternative to austerity,” she said. “That message has been a consistent feature of the last five years.

“London is a city of multi-millionaires. And yet a million people are using food banks. In Tottenham people are being driven down. And all the main parties are saying there is no alternative. We have to say that there is an alternative.”

She argued that’s why we need a left alternative to Labour that will continue the fight after the election.

She said, “David Lammy has tried to distance himself from Haringey Council. But that raises the question of the Labour Party.

“If they had a strategy for resisting austerity, that would mean mobilising people in the trade unions and the community.”

She added, “We have to take as big a chunk out of Lammy’s vote as we can. He cannot be allowed to take our community for granted.

“I’m the only candidate who after the election is still going to be here working with the community.

“TUSC is a resistance vote. We are there to say what is going on in parliament is corrupt. Our interests are not being represented by these people.”

Other TUSC campaigns have also provided an alternative for people fed up with Labour.

Simon Hickman is the TUSC candidate for Manchester Gorton. He told Socialist Worker, “I’ve had people calling round my house wanting to find out more because they’re looking for something different. They’re traditional Labour voters, and they’ve had enough.

“Even Labour Party members know there’s got to be a change—and if their party doesn’t change they’ll just move on.”

Simon explained that the TUSC campaign had helped to lay the groundwork for resistance to austerity after the election.

He said, “We’re going to have a TUSC public meeting within a week of the election.

“We’ve made some really good connections, which will be useful after the election. And we’re already known from fights to save the swimming baths and libraries.

“The election’s not the end of it—it’s the beginning.” 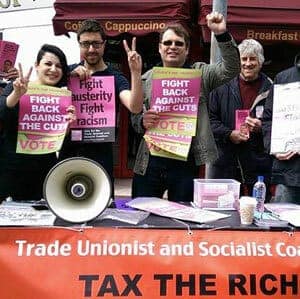 TUSC candidates have built vibrant and militant campaigns rooted in their communities and kept up the fight for votes right until polling day.

Jon Woods, TUSC candidate for Portsmouth North, told Socialist Worker, “We were campaigning in town last Saturday when we bumped into Tory candidate Penny Mordaunt with the Tory leader of the council and their campaign team.

“We were able to drown her out with the megaphone—we blasted them with anti-Tory stuff.

“They were getting really pissed off with being challenged in public”.

Lynne Chamberlain is TUSC candidate for the south London seat of Greenwich and Woolwich.

She told Socialist Worker how her campaign had helped her to make links with people who want to join the fightback.

She said, “I’ve got an email from someone from a Somali group here.

“There’s a couple of people in the group who changed their minds about voting Labour after seeing my leaflet.

“Now they want to have a meeting with me. A few people seem more familiar with us now.”

He told Socialist Worker, “You get the sense that there’s a significant minority who know what TUSC is. 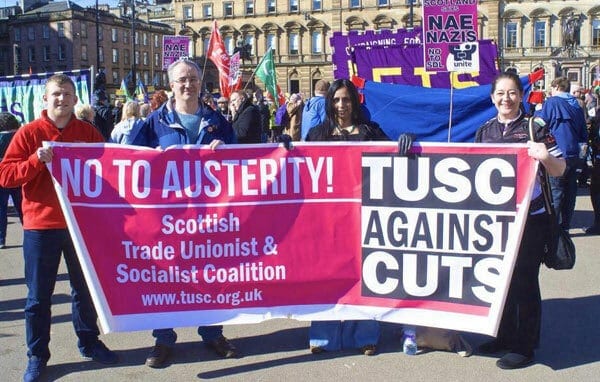 Use your vote to strengthen the left

We deserve better - so let's vote for it