The UCU union members walked out for two hours from 11am. They face a below-inflation pay deal of 1 percent—after years of low pay rises.

A crowd of strikers gathered at University College London. Natasha, a learning facilitator there, told Socialist Worker, “We are out today for fair pay and higher education.

“Some workers in universities don’t even receive the minimum wage. And new people face temporary or zero hours contracts.”

Like many in the union, Natasha had been concerned about the impact that a two-hour strike would have. “I wasn’t too keen on it,” she said. “But when around 25 of us stood up in our open plan office and walked out, we got lots of attention.

“I hope we can make a difference.”

Malcolm Povey an officer of the UCU at the . He told Socialist Worker that the strike was a success despite concerns about the union’s strategy.

“Two hours on strike is better than no hours on strike,” he said. “I know some people who didn’t come out who would have if it had been a full day. But in the circumstances the action was pretty good.”

Some bosses, such as those at , have said they will withhold a full day’s pay for the strike.

Patrick Connellan is branch secretary of the UCU there. He said, “People are saying they support the dispute but don’t want to strike for just two hours.

“Yet up to 70 people joined a rally and the mood was really good. Lecturers are very angry—but they want and deserve better leadership.”

The union estimates that lecturers have seen their pay drop by 13 percent in real terms since 2008.

Louise works in admin at UCL. “Our pay has been held at a low level for so long,” she said. “At first you thought you could put up with it for a bit. But now it’s too much.”

Unison union member Josh added, “We’re here supporting the strike because we’re all campaigning for the same thing—fair pay. It’s having a real impact. It’s harder to pay rent and the bills.”

Caitlin O’Neill, a geography postgraduate student at UCL, said there was a lot of support for the action among students. “As a student, I benefit from the work that lecturers and cleaners do,” she said. “I’ve paid a lot of fees to be here—where have they gone?”

The success of today’s strike, in difficult circumstances, shows the potential to win the dispute. It follows two successful 24-hour strikes last year. Union leaders had previously agreed on an escalating programme of action—and some lecturers have initiated a petition demanding that they return to this.

A further two-hour strike is due to begin at 2pm on Tuesday of next week. And university lecturers are also set to walk out for 24 hours along with the Unison and EIS unions on 6 February.

As one woman lecturer at UCL put it, “The union is mandated for escalating action. The two-hour strikes can’t become a substitute for that.” 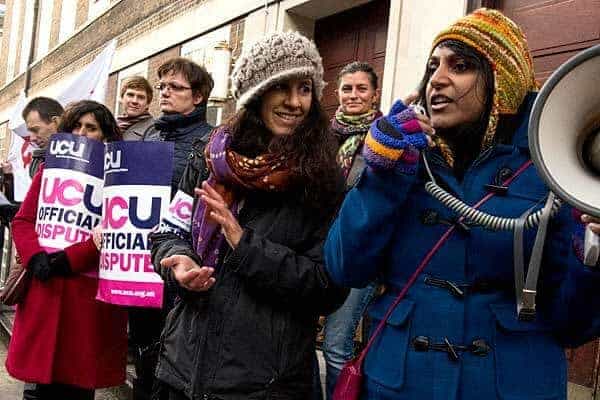 Photos of the UCU strike on Tuesday 28 January 2014