These are the first national strike ballots against cuts and could see more than 100,000 workers on strike in budget week, days before the TUC demonstration in London.

The Tories have launched their opening shots in their assault on education—and worse is to come.

Jim Wolfreys, president of the UCU union at King’s College London, told Socialist Worker, “These are the most critical disputes in our union’s history.

“The cuts could lead to 40,000 redundancies in universities as well as taking away the chance of an education from the poorest students.

“We have to move fast and throw all our energy into building the biggest yes votes in the ballots.”

They are also balloting to defend the Teachers’ Pension Scheme (TPS).

Professional body the Institute for Learning raising its annual fees to £68 for each lecturer has angered UCU members—and made the pay offer even more ludicrous.

workers are balloting over their employers’ failure to provide guarantees on job security and pay.

They are also voting on whether to take action to defend pensions.

For lecturers in older, pre‑1992 institutions, they are voting on planned changes to the Universities Superannuation Scheme (USS).

Those in newer, post-1992 institutions are balloting on defending the TPS.

At the same time, a number of disputes are breaking out in individual universities over cuts. “It’s crucial that we have a national fight over jobs, pay and pensions,” says Jim.

“We can’t leave individual universities and colleges to fight alone.”

Unfortunately, two of the ballots for higher education lecturers were delayed and papers were sent out more than two weeks late. The closing date for the ballots, however, remains 2 March. Lecturers must urgently use the time available to build yes votes.

Jim Wolfreys is standing for president of the UCU and is backed by the UCU Left. Several UCU Left candidates are standing for seats on the union’s national executive and for national officer positions. 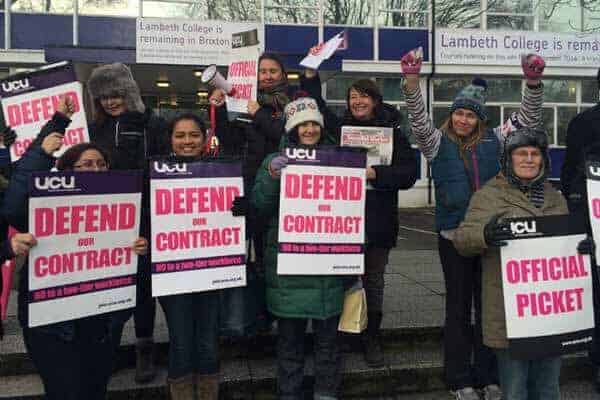 Lambeth College strikers say, 'Our fight is for every worker'

Battle in the classrooms