Protesters highlighted the fact that bailed-out banks are announcing huge bonuses and profits while ordinary people find their services slashed.

More than 40 protests took place in Britain—and action also spread to the US, where US Uncut has been set up.

In Islington, north London, activists set up a laundry in a Royal Bank of Scotland branch. The local council is threatening to cut services for older people, including a laundry service.

Bailed-out banks in Liverpool and Redhill were transformed into “hospitals”.

Around 20 people brought tents and sleeping bags to a Natwest branch in Brixton, south London, to set up a homeless shelter.

US Uncut organised more than 50 protests. Over 100 protesters shut down a branch of Bank of America in Washington.

New Uncut groups have also been formed in France and Canada.

Go to www.ukuncut.org.uk for future protests or to add details

The bitterness that lies behind the wildcat strikes

Stoke festival is key chance to hit the BNP 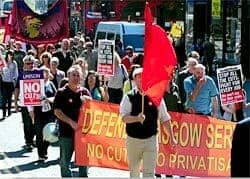 May Day marches show the anger against Tories