This article is over 10 years, 0 months old
Over 2,000 workers in three unions are preparing for a new round of strikes at consumer goods giant Unilever next week.
By Dave Sewell
Downloading PDF. Please wait...
Tuesday 10 January 2012

Over 2,000 workers in three unions are preparing for a new round of strikes at consumer goods giant Unilever next week.

The company wants to move away from a final salary pension scheme. The proposed changes would cost the average worker up to 20 percent of their retirement income—rising to 40 percent for some.

Unilever is one of the most profitable firms in Britain, and its pensions scheme is well funded. But it has refused to negotiate with unions over its pensions attack.

On 9 December last year workers in the Unite, GMB and Usdaw unions walked out at 12 sites across England and Wales in the first ever national strike at the company.

Now the unions have said they plan to call a 12 day programme of rolling action starting from Tuesday of next week.

Around 100 Unilever workers protested outside a shareholder meeting at the company’s head office in London on Tuesday of this week.

Jennie Formby, national officer of Unite, said, “It would seem that Unilever believed the workers would give up after one day’s strike—but they are badly mistaken.”

Colin Thompson is the vice-chair of Usdaw at Unilever’s manufacturing site in Port Sunlight, Merseyside. “They’ve had to admit it’s not about costs,” he told Socialist Worker. “What we’re paying our CEO is obscene.

“He’ll earn more in two years than we will in a lifetime. But they’re taking this money from people who’ve spent their whole working lives at the company.”

Daniel, a fitter from the factory in Purfleet, Essex, added, “They are jumping on the bandwagon. After what the government is doing in the public sector, every big company wants to get rid of its final salary pensions scheme.

“It’s not just at Unilever—but we are the first in the private sector to stand up and fight it.”

Unite’s leadership believes that the strategy of targeted strikes will make it easier to have a sustained impact on Unilever’s profits.

But they risk wasting the momentum from December’s strike if they do not call workers out to strike together.

Oil firm Shell has announced that it wants to close its final salary pensions scheme to new members in the first quarter of 2012.

It says it wants to “reflect market trends in the UK”.

According to its last official valuation in December 2010, the scheme had a surplus of £1.1 billion.

Unite general secretary Len McCluskey said, “This is a disgraceful act, nothing less than greed on the part of one of the world’s richest and most powerful corporations.”

Government attacks on public sector pensions have opened the door for this attack. The union must fight it.

Firefighters gear up to strike over cuts

Demonstrate Monday, 7pm, in London in solidarity with Spanish protests 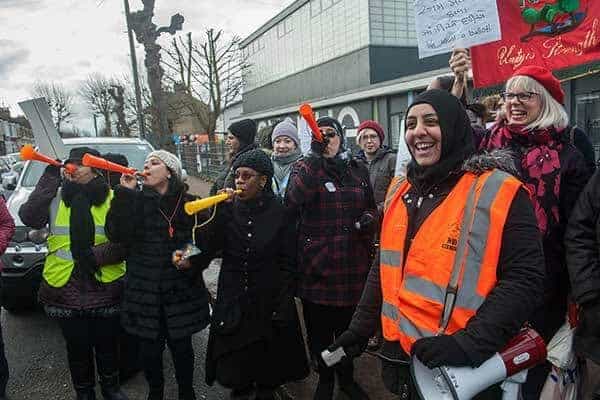