“IF LABOUR think that they have been given a mandate to go ahead with further privatisation of public services then they had better think again.” So said Dave Prentis-the leader of Britain’s biggest union, UNISON-this week. He was one of several key trade union leaders to speak out against New Labour’s plans to privatise vital public services.

Bill Morris-leader of Britain’s second largest union, the TGWU-said, “I reject the notion that efficient public services can only be provided in partnership with the private sector.”

John Edmonds, leader of the giant GMB general union, said, “If the government plans to lead an overall increase in private sector involvement in health, that will lead to conflict.” And Roger Lyons, general secretary of the MSF union, said, “Our members want to work for the NHS, not for some get rich quick plc.” Union leaders are so furious at Blair’s privatisation plan that John Monks, head of the Trades Union Congress, intervened. He tried to calm things down by warning against the dangers of confrontation with the government.

The union leaders sense that millions of their members cannot stomach more privatisation from a New Labour government. But the big question remains-are those union leaders going to lead any fight to stop privatisation? Will they offer national support the next time a dispute erupts against a PFI scheme, like the recent one in Dudley Group of Hospitals? We need more than mere words. We need bold action.

WITHIN DAYS of the general election two groups of workers pointed to the kind of clashes New Labour’s privatisation drive will bring:

BIN WORKERS in Brighton and Hove occupied their depot on Monday in a show of defiance against their private bosses’ demands for pay cuts and longer working. Sita, a big multinational, told street sweepers on Monday they would have to increase their rounds. Some 12 workers refused and were immediately sacked.

The rest of the 250 workers at the Hollingdean depot in Brighton then walked out on strike. They were sacked, so they occupied the buildings. They spent the night there.

Tony Wilson, a GMB union shop steward, said on Tuesday, “We are standing firm. We want Sita to reinstate everybody who was sacked.” The company has been pushing for pay cuts of up to 30 percent for months.

GUARDS working for 21 train operating companies have voted for strike action by four to one to improve safety standards wrecked by privatisation. The RMT union announced the ballot result on Tuesday. They are planning strikes for a week on Monday and 4 July.

Guards are angry that their vital safety role has been undermined after the rail privateers introduced new rules in October 1999. Those regulations limit guards’ role for passenger safety and lump more responsibility onto the train driver. The train companies have instead pushed guards into collecting fares and selling merchandise.

The strike ballot came as the New Labour government again ruled out renationalising the railways. This is even though Railtrack, the private company that runs the infrastructure, is in meltdown and could easily be brought into public ownership.

ONE TRADE union leader has distinguished himself by backing the government’s privatisation plans-Sir Ken Jackson of the engineers’ AEEU union. No wonder Sir Ken is Blair’s favourite union leader. He called for “greater competition and higher productivity in public services”.

Jackson also called for “no- strike” deals in public services. He dared to claim, “We know from our own experience that efficiencies in the private sector can be a sure path to job security.”

Try telling that to workers at Corus, Motorola and other private manufacturing firms who have recently lost their jobs. And what about the 28 percent of job cuts which come with each PFI scheme in the NHS?

“THERE IS now a political vacuum after the election, with one in four people voting Labour. It was a landslide and it’s good that we kept the Tories out. But there is a vacuum. Look at the vote for Dr Taylor in Wyre Forest. There was a high turnout and a staggering 43 percent swing to his campaign of saving hospital services.

It shows what happens when people feel that someone is representing their interests. The left had different responses in the election. Some stood socialist candidates.

Others like myself argued to vote Labour, and some even voted for the Liberal Democrats because they saw them as more left wing on the question of public services. Now we’ve got to get together around the issues. First of all to campaign around the privatisation of health and education.

Then we have to campaign over whatever happens about Star Wars. Then there’s pensions and the environment. We also have to have a positive look at what we say about Europe, without falling into the Hague “Save the pound” mentality.

We have to build alliances on all these issues-the questions of peace and war, on public services-and we have to use persuasive arguments. We have to build a movement from the bottom up. The socialist case is stronger than ever, but we are up against strong anti-democratic forces.

The media depict the anti-globalisation movement as violent. But we have to find a way of getting through with persuasive arguments. That is possible. Look at the Irish referendum. All the political parties and the trade unions were on one side. But the people said no.”

THE FAMILY of a black man killed outside a Wiltshire nightclub are furious that a judge acquitted the soldier who killed him of murder on Monday. Rail worker Glyne Agard died of severe head injuries after he was attacked last year.

Four soldiers were charged with murder. A judge directed the jury to acquit two of them two weeks into the trial. He then moved this week to drop murder charges against the remaining two, Thomas Myers and Wayne King, after they pleaded guilty to less serious offences. Outside the court Detective Superintendent Gary Chatfield was asked if the police still view the attack as racist. He said, “A good witness, a doorman, gave evidence that racial abuse was used. It is still my belief that that is what happened.”

THE NEW Labour government fought to the last to stop an extremely modest European Union measure over redundancies coming into force.

The EU directive merely insists on companies consulting workers before redundancies are announced. It does not prevent sackings. Companies can “consult” and then go ahead anyway.

But even this was too much for New Labour. The new Europe minister, Peter Hain, got the directive watered down so it will apply only to companies with 150 or more workers in 2003.

PATIENTS ARE being sent home from hospital too early because of the government’s obsession with waiting lists, according to the Carers National Association. The association’s report shows:

NEW LABOUR’S plans for more private sector involvement in the NHS have been slammed in a report by top health experts Allyson Pollock, David Rowland and Neil Vickers:

“Evidence from the US shows that privately managed hospitals are inefficient and spend 34 percent on administrative costs compared with 12 percent in the NHS. Private hospitals are far from being the Rolls-Royce of institutions which Labour believes them to be. They have lower staffing levels and lower levels of clinical support. The NHS has also picked up the pieces of poor private sector performance. Last year there were 142,000 admissions from private hospitals to the NHS. The NHS has for a long time experienced the efficiencies and effectiveness of privately managed services. Britain’s filthiest hospitals are ‘cleaned’ by private sector contractors.” 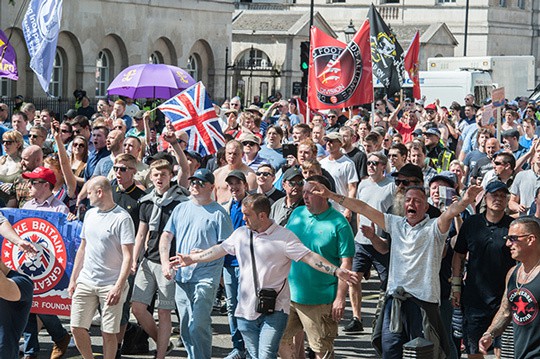 Join the protest against racist DFLA march in London

Tories plan to lock up teens