This article is over 17 years, 7 months old
THE RMT union has won a major victory against victimisation and management attempts to break workers’ organisation on London Underground.
Downloading PDF. Please wait...
Saturday 09 October 2004

THE RMT union has won a major victory against victimisation and management attempts to break workers’ organisation on London Underground.

Brian Munro, secretary of the RMT’s London Transport Region, was sacked on Tuesday of last week after a disciplinary hearing into his activities on an official picket line.

Within 41 hours he was reinstated after a hastily organised appeal hearing. Brian explained to Socialist Worker:

“This is an unprecedented climbdown by management. I faced charges arising from the RMT’s strike on London Underground from 29 to 30 June.

“They were levelled against me the day after negotiations ended that dispute. That alone signalled this was a clear case of victimisation. I had six separate witness statements to prove I acted in no other way than professionally on the picket line.

“But the managers at last week’s disciplinary hearing were not interested.

“I am a union activist, but I have to admit my first reaction on the day after my sacking was just like anyone else in this position. I wondered how I’d be able to look after my 16 month old daughter.

“Then almost immediately RMT assistant general secretary Pat Sikorski was on the phone with a plan of action.

“The union’s executive immediately agreed to authorise a strike ballot. The following day was an already scheduled meeting of RMT reps and activists across London Underground.

“I was inundated with messages of support and pledges of action. On the Thursday, with the campaign for my reinstatement already underway, the union’s general secretary, Bob Crow, represented me at the appeal hearing.

“Management backed off. We are contesting the one-year warning they have issued.

“The bottom line is that I am innocent of the charges they brought against me. This was about attacking the union and was agreed at the highest level.

“The message everyone should take from what happened is that only strong union organisation can give workers any chance of justice at work.

“I’m grateful to my union, from top to bottom, for proving that again in my case.”

The RMT this week also began pressing the case of tube worker Joanne White, who has been sacked after she took a short time off to recover from being assaulted by a customer.

Astonishingly, an appeal to higher level managers agreed that the way she had been sacked was wrong, but refused to give her her job back.

Among other initiatives, the RMT is asking people to write a letter to London mayor Ken Livingstone about Joanne’s case.

RMT UNION members at Eurostar are voting on an improved pay, conditions and grading offer following talks with the company last week.

These took place after over 300 engineering, maintenance and office staff voted by more than six to one to strike.

Over 160 of our colleagues in customer services had already struck for one day to demand a single rate of pay for the job and improved conditions.

The package on offer from management is complicated and a mixed bag.

Customer service staff at Waterloo will see their pay rise to £20,000 from the beginning of next month, while those at Ashford get a rise to £17,780.

Union negotiators told us this is the best that could be got. Many of us feel more could be achieved through further action, especially over the issues of travel concessions and hours, which were what the engineering and office staff balloted over.

There are some welcome concessions over pay for our customer service colleagues. But it is important we win on the issues people were balloted on.

Rejecting this deal and taking action across all sections of the company is the way to get more.
EUROSTAR WORKER 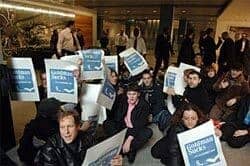