Union’s strength has Argos bosses in a panic

This article is over 13 years, 11 months old
Warehouse and distribution workers in the Unite union at retail giant Argos struck against a below-inflation pay offer on Thursday of last week. Yuri Prasad joined pickets at the company’s warehouse in Basildon, Essex, and found workers angry at a lot
Downloading PDF. Please wait...
Tuesday 22 July 2008

Alison Beesley is the Unite deputy convenor at Argos’s Basildon depot. She joined the company nine years ago and was one of the first shop stewards when the union was recognised a year later.

She says, “It was awful when I started work here. Jobs were slowly being casualised, with some people coming into work at 6am only to be sent home without work and agency staff replacing permanent workers.

“You could be sacked for very little reason. But it was those harsh conditions that made it possible for us to recruit to the union.

“It was very tough to start. At first we didn’t know how to be proper union reps, and our bosses tried to intimidate us. Some of the first stewards had to leave the job.

“Over time we got ourselves established. We recruited to the union by telling people it was like having an insurance policy against management. The reps have also grown more confident.”

The 50-strong picket line is united, friendly and full of life.

Bored managers and security guards look on as pickets laugh as a company minibus returns empty from a trip to pick up workers who wanted to cross the picket line.

Alison says that having the union has given everyone a sense of dignity. Workers are more confident to stand up for their rights, but the union still faces hostility from management.

She says, “In the run-up to the strike everyone had at least one letter from the company telling them not to strike. Then it began attaching its anti-union propaganda to pay slips.

“But people started ripping the leaflets up in front of managers.

“Lots of people started coming to work with Unite baseball caps on, which wound up the team leaders. One of them started shouting, ‘What are you doing with that shit on your head’.”

As it became clear that the union was going to win the strike ballot, and there would soon be action, management increased the pressure, says union convenor Mark Barter.

“Workers were called into one-to-one meetings with managers and asked whether they were in the union, if they supported the strike, and whether they would be prepared to cross a picket line in secret transport that Argos would organise.

“The casual workers, some of whom have been on temporary contracts here for years, were told that if they didn’t come in they would be finished.

“It was an attempt to scare people into not striking, but I think it backfired. The strike today is so solid, the company hasn’t even been able to get all the casual workers in.”

There was anger at how Argos bosses were unwilling to share the rewards for the company’s huge profits with the workers, and the super bonuses being awarded to company directors.

James and Danny take home £260 for a 37 and half hour week. They say that the only way to survive is to work as much overtime as possible.

“Many of us are paying up to 500 a month rent,” says James. “Most of us have to come to work by car because there’s no proper bus service and our shifts can start at unsocial hours.

“With petrol prices going through the roof people are being hit really hard, but Argos wants give us a below-inflation rise. And it wants us to go from weekly to monthly pay – meaning three weeks without any money coming in.”

Alison says that Argos heavily recruited casual workers in the run-up to the dispute in order to use them as strikebreakers, and that it also employs hundreds of workers on short-term contracts, sometimes for years at a time.

Twenty three year-old Jack is a forklift truck driver who came to work in Britain from Gniezno in Poland. He has been on a temporary contract for more than two years and proudly sports a Unite T-shirt.

He says that the union decided it would be safer if workers on short-term contracts went into work during the strike. Nevertheless he joined pickets during his lunch break.

“When I started working here managers were always talking badly about the union, so at first I didn’t join,” says Jack. “And they kept saying that if I work hard eventually there would be a permanent contract for me.

“So I worked hard and did training courses, but I still have no contract, and I feel cheated.

“My girlfriend, who is also Polish, used to work here too. She was sacked in December last year, after more than a year’s work.” The union says she was dismissed because she was pregnant.

Jack says that the union started recruiting large numbers of Polish workers by taking up issues affecting casual workers, and running free English classes in which it was able to put the case for collective organisation.

“Today, around 80 percent of Polish workers are in the union, and we are still fighting for permanent contracts,” he says. “We even have a Polish shop steward who translates the union newsletters for us.”

Shop steward Steve Lloyd says, “I think we need to start co-ordinating all the pay campaigns.

“Everyone’s pay is being held below inflation – except the bosses that is – and we should all fight alongside one another. I feel terribly let down by this government. It doesn’t feel like Labour to me, it’s more like the Tories.”

Last week Argos workers proved that the fight for decent pay is not confined to the public sector, and that there is a growing feeling that all workers should work together to fight the attacks.

On returning to work, Mark Barter told Socialist Worker, “The mood here is better than ever.

“Once upon a time the bosses thought that Basildon was the weak link in the union that wouldn’t strike. No one believes that now.”

There were negotiations as Socialist Worker went to press, but union members were set to strike on Thursday of this week, with a rolling programme of action set for next week.

Argos workers also struck at depots in Lutterworth in Leicestershire, Heywood in Greater Manchester and Bridgwater in Somerset on Thursday of last week.

joined the pickets at Heywood to show their solidarity. There was enthusiastic support from truck drivers and other traffic.”

There were 50 pickets in Bridgwater.

Unite rep Keith Williams said, “Argos has made almost half a billion ponds profit, awarded its chief executive a 58 percent pay rise and yet they offer us a below-inflation pay award.” 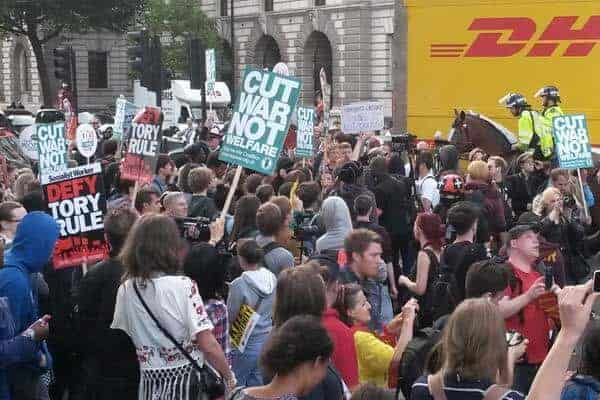 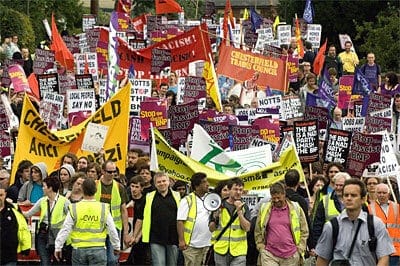