This article is over 16 years, 4 months old
"This is a fight that goes right to the heart of trade unionism. It’s about our right to elect our representatives, rather than have management select them.
Downloading PDF. Please wait...
Saturday 03 September 2005

“This is a fight that goes right to the heart of trade unionism. It’s about our right to elect our representatives, rather than have management select them.

“I’ve had managers trying to order me as a union rep into meetings, or complaining about stewards. But union reps are accountable to one group of people only — those who elect us.

“That’s what Jerry has done for over 20 years. That’s why management are going for him. And that’s why you can’t be a trade unionist and not be actively backing the fight for reinstatement.

“We’ve done a collection at my branch and we’ll be doing more. Our regional council of Amicus has donated £2,000 to the strike fund. We’re sending a delegation down to the demonstration. This, just like the Gate Gourmet struggle, is a fight for all of us.”

“Jerry has supported every progressive cause and every group of workers in struggle in the Bristol area for years.

“When we went on strike for our national pay claim, Jerry chaired the firefighters’ support group. He’s been there over hospital cuts, schools campaigns, opposing deportations, you name it.

“People have learnt they can turn to the Rolls workers for support. He’s a model of progressive, effective trade unionism. That’s why the Fire Brigades Union is right behind this fight for reinstatement.”

“We’re taking our union’s national banner to the demonstration in Bristol. It’s so clear this is an attack on the whole trade union movement and we’ve got to fight it as such.

“We’ve got workers in Bristol taking indefinite strike action, the kind of action that some of us think is needed in our own union to stop 104,000 job cuts.

“When we had a national strike last November Jerry and the Rolls workers were among those who supported us—and solidarity is a two way street.

“Our national executive will be discussing making a £500 donation to the strike fund. We should make this an issue across the union movement.” 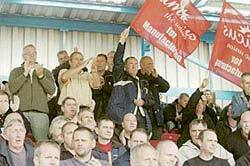