Union tour to save Remploy jobs sets off

This article is over 14 years, 11 months old
Up to 100 people assembled on Tuesday morning outside an Aberdeen Remploy factory which is scheduled for closure.
Downloading PDF. Please wait...
Tuesday 28 August 2007

Up to 100 people assembled on Tuesday morning outside an Aberdeen Remploy factory which is scheduled for closure.

The rally was the start of a month of marches and meetings aimed at keeping open 43 factories which employ disabled staff.

The Remploy consortium of unions – the GMB, Unite and Community – is touring all of the Remploy sites earmarked for closure.

The campaign will end outside the Labour Party annual conference in Bournemouth later this month.

Paul Kenny, GMB general secretary, told the rally in Aberdeen, “The European Union rules allow public sector orders to be placed with Remploy without going out to tender.

“This month-long mobile demonstration aims to generate a groundswell where the politicians who can sort this out are given the backbone to do so.

“The trade unions will not allow the destruction of jobs for disabled workers without a fight.”

John Quigley, Scottish regional secretary of Unite, said, “This will be a truly historic event and it has to succeed – otherwise many disabled people will find themselves out of work and without hope for the future.

“I would rather we did not have to do this, but Remploy and the government leave us no choice.”

From the bus that is heading up the tour of protests Phil Brennan, GMB senior steward, told Socialist Worker, “The first morning was excellent. It was a really good start to the tour.

“The reality is that if Remploy was a public company the board would have been sacked by now.

“We are hoping that by raising the profile of the fight against the closures we can put enough pressure on the government so that it will be forced into stopping the closures.

“That’s why the tour finishes at the Labour Party conference in Bournemouth.”

For a full list of all the venues and dates for the Remploy protest tour go to »www.gmb.org.uk/remploy 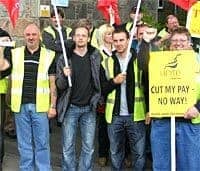 Unity is First on the agenda during Aberdeen bus strike

Council workers' action has an impact